Islanders Tradition Have a New Home in Brooklyn

Storied New York Islanders traditions will have a new home at Barclays Center this fall in the team’s first season in Brooklyn. 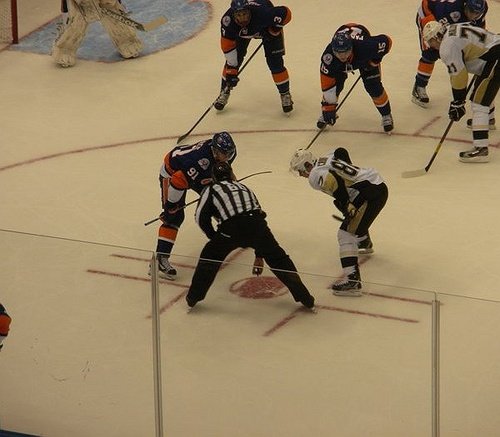 Brooklyn, NY - June 2, 2015 - Storied New York Islanders traditions will have a new home at Barclays Center this fall in the team’s first season in Brooklyn.

In maintaining continuity with the move, the Islanders will keep their iconic logo, as well as their primary home and road jerseys. Additionally, the banners of the team’s four Stanley Cup championships, former Head Coach Al Arbour, former General Manager Bill Torrey and retired Islanders jersey numbers will hang in the rafters at Barclays Center as a permanent tribute to the team’s rich history. Popular elements that have been mainstays at Islanders games such as the public address announcer and the Blue and Orange Army will also remain part of the game experience.

The Islanders public address announcer, Roger Luce, will continue to be the voice of the Islanders at Barclays Center. Luce has been a presence at Islanders games since the 1998-99 season.

The Blue and Orange Army, the Islanders super-fan group and some of its most boisterous supporters, will lead the crowd in Yes! Yes! Yes! chants from section 229 at Barclays Center, also known as Loudville.

Islanders legends Mike Bossy, Clark Gillies, Butch Goring, and Bobby Nystrom have been named inaugural members of the New York Islanders Legends Program at Barclays Center. Each legend will serve as an official Islanders ambassador starting with the 2015-16 season. Members will make special appearances at community events and Islanders games to foster the team’s presence in and around the borough.

“It is of the utmost importance to us to carry on the many deep-rooted traditions of the New York Islanders as they move to Brooklyn,” said Barclays Center CEO Brett Yormark. “Throughout its history, the team’s customs and unique elements have been instrumental in shaping the identity of the franchise. We’ve spent a lot of time talking with Islanders fans who made it clear they wanted their favorite traditions brought to Brooklyn, and we have listened. We are also delighted to have the support of Islanders legends as we welcome the team to the borough.”

Fans can purchase season tickets by calling 844.33.ISLES, or going online. Fans can choose their seats to take a 3D tour of Barclays Center with New York Islanders Virtual Venue.

For more information about the Islanders move to Brooklyn, click here.