Cuomo: "This year, across New York, we are offering drop-off locations statewide to ensure that old, worn American flags can be retired with respect and honor." 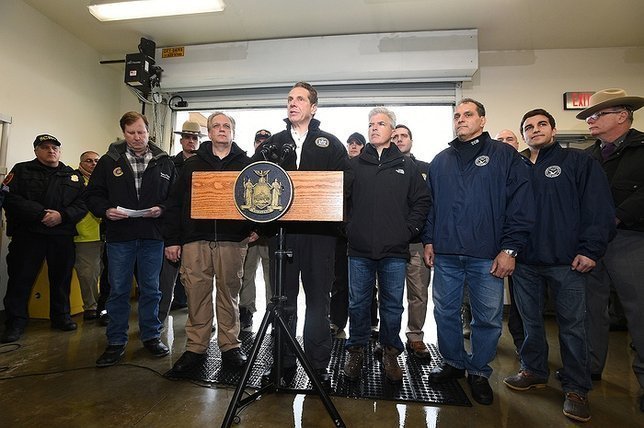 Albany, NY - May 18, 2017 - Governor Andrew M. Cuomo today announced that the Office of General Services will collect worn and tattered flags at locations statewide so that they can be properly retired. The collected flags will be disposed of as part of the Memorial Watchfire hosted by the Vietnam Veterans of America, Chapter 103, on Sunday, May 28th, 2017 at the New York State Fairgrounds, Syracuse, NY. Information on the Watchfire can be found here.
"This year, across New York, we are offering drop-off locations statewide to ensure that old, worn American flags can be retired with respect and honor," Governor Cuomo said. "If you or any of your friends or neighbors are in possession of a tattered flag, I encourage you to visit one of our various drop-off locations across the state to allow the flag to be properly disposed of."
The Office of General Services has set up drop-off locations across the state for businesses and individuals to bring their flags.  All flags collected will be properly folded prior to disposal. The drop-off locations will be collecting donations from Thursday, May 18 to Thursday, May 25.
Bill Martin, Watchfire Committee Chair, said, "We are thrilled Governor Cuomo is collecting flags for the Watchfire this year. The Watchfire provides the community a place to respectfully retire unserviceable American flags."
Eric J. Hesse, Director of the New York State Division of Veterans' Affairs, said, "All Servicemembers and Veterans raised their right hands and pledged to defend the values and ideals that the American flag symbolizes. Through these efforts to retire the American flag with proper care and respect it continues to demonstrate Governor Cuomo's and New York State's efforts to preserve this symbol of patriotism."
OGS Commissioner RoAnn Destito said, "As the home of the Service Disabled Veteran Owned Business Program established by Governor Cuomo, the Office of General Services is honored to help citizens properly dispose of their unserviceable American flags."
The drop-off locations are as follows:
Visit the Division of Service-Disabled Veterans' Business Development webpage here.