By Christian Abbatecola Published: May 10 2014

Researchers have discovered a star born of the same cluster as our sun for the first time. 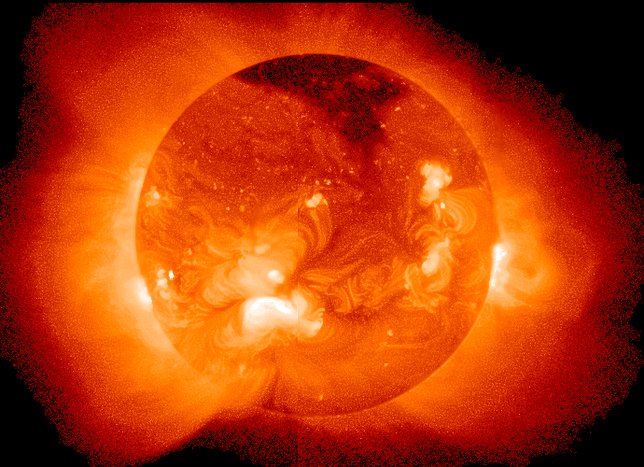 An international team of researchers led by astronomer Ivan Ramirez at the University of Texas in Austin has discovered what is being referred to as the sun’s “long-lost brother.” The star, identified as HD 162826, is believed to have been born of the same cluster as our own sun and is made of the same chemicals.

According to astronomers stars born of different clusters bear different chemical compositions, which means that finding two stars with identical compositions— as is this case for our sun its newly discovered sibling—indicates a shared origin. In the case of the sun, barium and yttrium have been identified as key distinguishing elements.

HD 162826 is fifteen percent more massive than our own sun, would have emerged from the same gas cloud roughly 4.5 billion years ago, and is located 110 light years away in the Hercules constellation. Researchers are hopeful that the methods used to find this first sibling will help in finding other stars born of the same cluster.

“The idea is that the Sun was born in a cluster with a thousand or a hundred thousand stars. This cluster, which formed more than 4.5 billion years ago, has since broken up,” said Ramirez. “A lot of things can happen in that amount of time.” The member stars have broken off into their own orbits around the galactic center, taking them to different parts of the Milky Way today. A few, like HD 162826, are still nearby. Others are much farther afield.”

As more siblings are identified, scientists will be able to trace the stars back to their birthplace and piece together a fuller explanation of where and how our sun formed.

“We want to know where we were born,” Ramirez stated. “If we can figure out in what part of the galaxy the Sun formed, we can constrain conditions on the early solar system. That could help us understand why we are here.”

Ramirez added that there is a marginal chance these sibling stars could have also developed solar systems with other planets that harbor life. In their earliest days, collisions could have broken off chunks of planets and sent them hurdling toward other heavenly bodies; such an interaction could have brought primitive life to Earth or even sent a life-bearing fragment of Earth to another planet.

“So it could be argued that solar siblings are key candidates in the search for extraterrestrial life,” stated Ramirez.