A Long Island cat somehow made its way from Long Island to Times Square. Now, two years later, the cat is reunited with its owner thanks to the help of a NYC zombie. 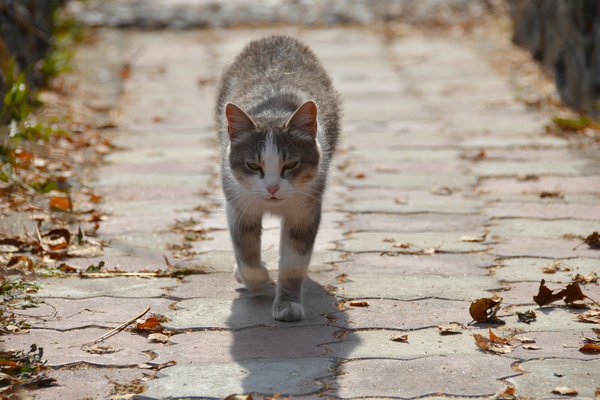 In the oddest of crossroads, a Long Island cat named Disaster went missing about two years ago, but finds his ways back home to New York City police officer Jimmy Helliesen, 51, with the help of a Times Square zombie.

Owner and police officer Helliesen thought he’d never see Disaster again when the cat escaped by clawing his way through a screen window of his Long Island home. But this past weekend, officer Hellisen was reunited with Disaster thanks to the help of Jeremy Zelkowitz, 22, a Times Square haunted house promoter who dresses up as a zombie daily.

Zelkowitz spotted Disaster terrified and darting into traffic on 42nd Street early Saturday morning. That’s when he picked up the black and white cat and brought him to a nearby animal hospital.

At BluePearl Veterinary Partners animal hospital its staff was a bit stunned to see a zombie walk through its doors with a cat. After Zelkowitz explained he’s dressed in costume for work and that Disaster needed help and care, they took in the cat and discovered he was implanted with a microchip. The microchip led them to contact the cat’s owner, police officer Helliesen.

It is still a mystery how Disaster made his way from Long Island to the streets of Times Square, but he remained well-kept and neat in the two years he’s been missing.

Officer Helliesen has adopted stray cats hanging around his Brooklyn precinct for years. Disaster was one of the first cats he took in.

Disaster has now returned to his home on Long Island with police officer Hellisen. Zelkowitz, an animal lover himself is happy to have helped reunite the two.