Cuomo: “These are difficult and unusual times for our State and Country." 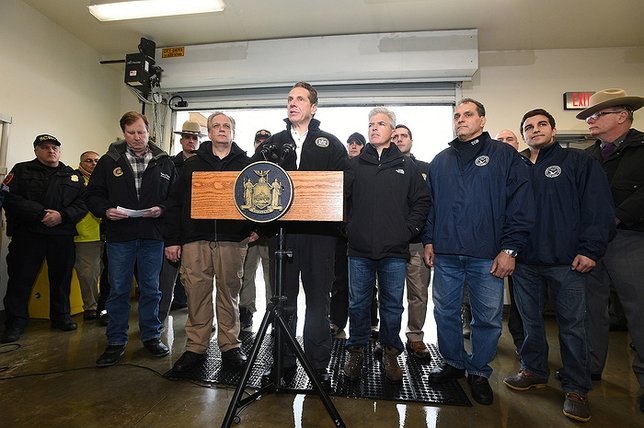 Albany, NY – April 3, 2017 – “These are difficult and unusual times for our State and Country.  An ultraconservative Congress poses an unsettling attack on individuals’ rights and American values.  It is also clear that New York State is a target for hostile federal actions ranging from severe financial cutbacks to deprivation of legal and personal rights.
“The federal government is attacking our health care system, abandoning our urban areas, cutting necessary assistance to the poor and targeting our new immigrants.
“In this environment our state budget takes on much greater significance. Indeed, it is not merely a budget at all: It is a statement of values, a guarantee of personal protection and a safeguard of financial security.
“Now is the time to protect individual rights and ensure justice for all. Criminal justice reforms have long languished and must be enacted.  New York is one of only two states in the nation to treat 16- and 17-year-olds as adults for purposes of criminal responsibility. Draconian punishments for youthful mistakes have ruined the lives of countless young New Yorkers.  We must pass “Raise the Age” once and for all.
“Our new immigrants are under attack by Washington. We must ensure that the legal rights of immigrants are protected and they have access to counsel.
“Despite New York City’s record number of homeless, the federal government is proposing to cut back on their assistance.  We must pass an effective affordable housing plan that both reforms and improves the old 421-a initiative and finally releases $2 billion to combat homelessness statewide. I signed the MOU releasing the $2 billion in homeless funds months ago and will not allow these funds to continue to be tied up in politics any longer.
“Women’s health care rights are under attack and our New York system must protect them.
“Washington’s financial assault is already under way. The Affordable Care Act repeal, if resurrected, would cost the State $4.6 billion. A Medicaid amendment pushed by John Faso and Chris Collins would cost New York taxpayers an additional $2.3 billion a year. Further, the outline of the proposed overall federal budget decimates urban areas and poverty programs and would cost the State an additional $1.2 billion.
“Making a bad situation worse, the federal government is reportedly moving to eliminate the deductibility of state and local taxes, which would effectively increase state and local taxes by 20 percent to 44 percent, depending on a person’s tax bracket. This would be a deathblow to New York, putting us at a horrible competitive disadvantage.
“Under these circumstances, it is imperative that the state make especially prudent choices regarding expenditures and does not over promise financial resources. Also, while the middle class continues to struggle, and we are facing federal cuts, allowing the millionaires tax to expire – a tax that generates $3.4 billion a year in needed revenue –  is not responsible.
“On issues such as Raise the Age, there are political and ideological differences between the Senate and Assembly. We must resolve these issues. A complete budget requires it.
“The looming threats from Washington leave us with two options: Our state budget must either fully anticipate and address our human and financial needs or we must keep working to reach compromise on the reform issues and remain financially cautious so we can adapt to federal actions once they are determined.
“The Legislature has not been able to reach total agreement on all issues necessary for a complete annual agenda. Raise the Age and affordable housing are especially controversial politically, but necessary governmentally. I will not accept ‘half a loaf’ on these issues.
“I said that I would allow the weekend for a grace period.  Given the inability of both houses to reach an agreement, I am sending up an extender of the current budget to keep the government fully functioning until May 31. I have spoken to both leaders who have agreed to pass the extender bill by tomorrow afternoon, which is the necessary deadline to keep government fully functioning.”