Governor Cuomo announced that the Federal Emergency Management Agency has restored over $9 million of previously denied Public Assistance program funding to reimburse the City of Long Beach for a project to rebuild its boardwalk ... 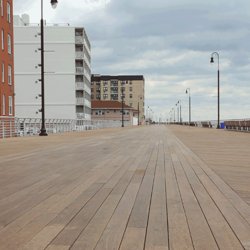 Long Beach, NY - August 28, 2015 - Governor Cuomo announced that the Federal Emergency Management Agency has restored over $9 million of previously denied Public Assistance program funding to reimburse the City of Long Beach for a project to rebuild its boardwalk after it sustained heavy damages during Superstorm Sandy. The New York State Division of Homeland Security and Emergency Services led the effort to overturn the initial denial of funds and ensure the city received full federal funding for its project.

"This boardwalk is the social, cultural and economic heart of Long Beach and it's restoration after Sandy was a critically important part of Long Island's recovery after the storm," Governor Cuomo said. "I am pleased this funding was rightfully restored for a boardwalk that, like the community, is better, stronger and more resilient than ever before."

Superstorm Sandy caused major damage to the City of Long Beach including extensively damaging almost 75 percent of the boardwalk and 85 percent of the structure's support system. Following the storm, the City of Long Beach built back better by replacing the boardwalk's decking and framing with more storm resilient materials. A mitigation feature was also added to reduce the impact of storm waves to both the boardwalk and buildings adjacent to it. The federal funding will cover 90 percent of the city's project costs, while the state will fund the remaining 10 percent.

New York State Division of Homeland Security and Emergency Services Commissioner John P. Melville said, "Returning these funds to Long Beach is one more step in their long term recovery. Restoration of these funds is critical to the financial health of the city. I am pleased that the state, Long Beach and FEMA could work together to reestablish a vital economic engine to the area."

Congresswoman Kathleen Rice said, “The Long Beach boardwalk was a symbol of the damage that Sandy inflicted on the Long Beach community, and it is now a symbol of our resilience and our commitment to rebuild better and stronger than ever. I’m pleased that full federal funding has been restored to help cover the costs of rebuilding the boardwalk, and I’ll keep working to ensure that communities in our district get the resources they need to fully recover from the storm.”

Assemblyman Todd Kaminsky said, "The Long Beach Boardwalk is not only the symbol of our community, but also an ideal place for recreation and the main attraction for tourism in our great city. I thank Governor Cuomo and DHSES for working so hard with the federal government to restore these funds to the City of Long Beach, which is still recovering from Superstorm Sandy."

Nassau County Executive Ed Mangano said, “The Long Beach Boardwalk is a symbol of the dramatic recovery efforts undertaken by the Long Beach community after Superstorm Sandy. I commend Governor Cuomo for working tirelessly to secure these Federal funds for our City by the Sea.”

Long Beach City Council President Len Torres said, "This is an enormous victory for Long Beach taxpayers. As 88 percent of our residents requested, we built a stronger, smarter, and safer boardwalk to withstand future storms. We are thrilled that our appeal went through and that FEMA will now pay for the sustainable hardwood and retaining wall that have made our boardwalk one that’s built to last."

Long Beach City Manager Jack Schnirman said, "We are eternally grateful to Governor Cuomo for stepping in two years ago when FEMA refused to pay for the entirety of the boardwalk. Additionally, Governor Cuomo dispatched the State Department of Homeland Security to assist us in our appeal. Governor Cuomo and Senator Schumer have both been incredible partners, advocating for us, every step of the way, in our long battle to recover from Sandy, and we are sincerely appreciative of their incredible assistance."

The Federal Emergency Management Agency's Public Assistance program provides assistance to state, local, tribal and certain non-profit organizations to recover after a disaster has been declared by the President.