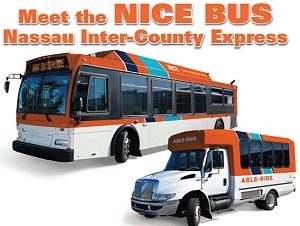 Nassau County, NY - March 28th, 2013 - Beginning March 31, 2013 Nassau Inter-County Express (NICE) will increase service hours on 10 of its busiest routes and institute new schedules that will include timetable adjustments to most routes in the system.  Adding more buses on key routes, such as the busy N6 and N4 routes, and making timetable adjustments on many others, is designed to decrease crowding on busier routes, as well as improve on-time performance.

These enhancements are the initial phase of a three-part plan that will include system improvements in April, June and September.  They are designed to improve NICE customers’ experience by adding capacity, restoring discontinued service, adding new service and stops and refining timetables.

Plans call for fixed route service to increase by about 7.3 percent in 2013 from 2012 levels; an approximately 11.8 percent increase in service is planned for Able-Ride.  In total, NICE proposes to add 200 service hours each weekday, or about 1000 hours per week on its fixed route operation; it also proposes to add about 150 hours on Saturdays and 84 hours on Sundays on fixed route.  On its paratransit operation, NICE plans to add approximately 475 weekly service hours.

Adjustments to the timetable designed to improve on-time performance will in some cases lengthen running times by 5-10 minutes for the full route and operator recovery/break times by three minutes in order to improve running times and better anticipate road conditions, such as traffic, that causes late buses. In most cases, minor timetable adjustments that will not be noticeable to riders.

On a quarterly basis, NICE reviews and adjusts schedules in response to rider patterns and system performance, to address specific concerns and to maximize utilization of the system in ways that benefit the most riders possible.  “NICE is looking at ways to make the best use of the funds that are available for bus transit in Nassau County,” said Mike Setzer, Chief Executive Officer of NICE.  “We are very pleased to have funds in 2013 to not only address some of the chronic issues facing NICE, but also make other improvements that will make a difference for our customers.”

In the past year, NICE has added 45 new replacement buses to its fleet and installed several technology upgrades, including new mobile data terminals in all Able-Ride vehicles.  NICE plans to upgrade its on-board electronics systems on its fixed routes buses in the next several years.  In addition, NICE is reviewing the possibility of introducing articulating buses with higher passenger capacities on busy routes and increasing the overall size of the fleet by as many as 20 buses.

NICE customers can pick up new printed timetable brochures on their bus or at NICE and MTA transit centers (clearly marked March 31, 2013, visit www.nicebus.com or call 516-228-4000 to determine if and how these service adjustments may affect your bus. Printed schedules are also available at more than 75 government offices, hospitals, colleges, libraries and others locations through-out Nassau County.