A man is wanted for attempting to rob a gas station in Middle Island. 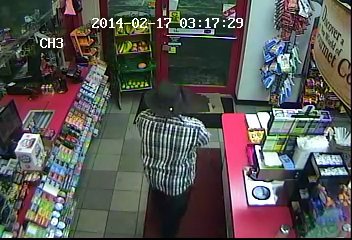 Middle Island, NY - March 26, 2014 - Suffolk County Crime Stoppers and Suffolk County Police Seventh Squad detectives are seeking the public’s help to identify and locate the man who attempted to rob a gas station in Middle Island.
A man entered the BP gas station, located at 975 Middle Country Road, on February 17, at approximately 3:20 a.m., displayed a knife and demanded cash. The suspect, who left without any proceeds, fled on foot east on Middle Country Road.
The suspect is described as white or Hispanic, clean shaven, between 35 and 40 years old, approximately 5 feet 8 inches tall, with a medium build.  He was wearing a brown cowboy hat, black and white plaid shirt, dark jeans and brown shoes.
Suffolk County Crime Stoppers offers a cash reward of up to $5,000 for information that leads to an arrest. Anyone with information about this crime is asked to call anonymously to Crime Stoppers at 1-800-220-TIPS. All calls will be kept confidential.