HTC Launches Its New Android Flagship, the One (M8)

The new iteration of HTC’s critically acclaimed smartphone is already available in store at Verizon and comes with a few improvements over its predecessor. 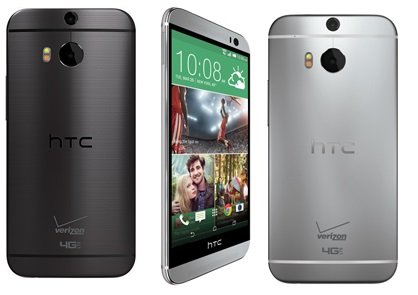 HTC turned a lot of heads last year when it launched the One (M7)—a sleek, high-end Android smartphone with a unibody metal design curved to fit comfortably in the user’s hand—and is looking to up the ante with this year’s successor, the all new One (M8).

The new One keeps the metal design from last year while upping the screen size from 4.7” to an even 5”, and maintaining a full HD 1080p screen protected by a layer of Gorilla Glass 3. Amateur photographers will be able to make the most of that screen when they use the new Duo Camera.

Like last year’s model the new camera features an “Ultrapixel” lens, but this time around HTC added a second lens which acts a depth sensor and allows for some fun effects. Pictures can be edited so that the focus is shifted from the foreground to the background, sections can be blurred or unblurred, and separate images can be cropped together with ease. The front-facing camera has been upgraded as well from 2.1 megapixels to 5 MP, allowing for crystal clear video chatting (or some very detailed “selfies”).

HTC is launching the One (M8) on the latest version of Android (4.4 KitKat) with the sixth generation of its Sense user interface. BlinkFeed—the service which allows owners to put notifications from their in-box, text messages, sports scores, and all their favorite social media platforms into a single easily viewable place—has made a return, but Android purists will be happy to know that it is no longer the default home screen.

A set of gesture controls, dubbed Motion Launch, has also been added with the new One. Users can now answer calls without swiping or pressing any buttons simply by raising the phone to their ears, and they can ignore one by flipping the phone on its face. Double tapping the screen will wake the phone up from sleep, and turning it on its side and pressing the volume key will skip straight to the camera app.

Under the hood the new One is packing a 2.3 GHz quad-core processor (providing a little extra pep over last year’s 1.7 GHz processor), 2 gigabytes of RAM, and a choice of 16 or 32 GB of storage space. The initial memory is a downgrade from last year’s model, but HTC has added support for microSD cards which will now allow users to tack on additional 128 GB of memory if they feel the need.

The battery has also gotten boost from 2300 mAh to 2600, and while that might not be quite as hefty as Motorola’s Droid MAXX or even the Galaxy S5 the phone can still provide long lasting power through its new Extreme Power Saving mode. When enabled, this feature cuts off non-essential functions and shuts down background apps, allowing the device to last an estimated 15 hours on a mere 5% charge. It’s not a feature that the average user will want to have on all the time, and it won’t be available until HTC sends out an update for US owners, but it could help a person in a jam when there aren’t any chargers around.

Though the HTC One (M8) was only announced yesterday, it is already available through Verizon, AT&T, and Sprint for order online. Those hoping to snag one for themselves in-person will likely have to head to a Verizon store, as the carrier exclusive in-store availability through April 9. Verizon is currently selling the 32 GB version for $199 on-contract.