Crowd at Nassau Legislature Rallies for Action on Redistricting Reform

Non-partisan Coalition in Talks with Republicans, Democrats to Craft Legislation Putting Voters at Heart of Process. 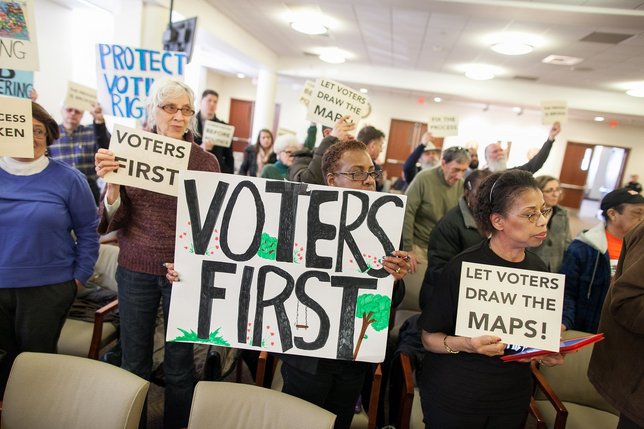 Mineola, NY - March 25, 2014 - Chants of "Put voters first!" and "Si se puede!" ("Yes we can!") filled the Nassau County legislature on Monday, as over 40 voters and supporters of the Nassau United Redistricting Coalition rallied outside and shared public testimony on the need for a fix to Nassau County's divisive and malfunctioning redistricting process. (Pictured right) The Coalition on Monday revealed that, after 6 months of research, consultation and advocacy, they are in talks with both parties over draft legislation that may be taken up the nineteen-member legislature.

"We're tired of politicians dividing up our communities for their own benefit, we need better redistricting Nassau," said Cheryl Jenkins, a member of New York Communities for Change.

"Redistricting is about the power of our votes and whether government works for us. Nassau voters deserve an end to deadlock and overwhelmingly support a common-sense, independent redistricting process," said Steve McFarland, Nassau County Organizer for the Long Island Civic Engagement Table. "We are glad to be getting to work on legislation that our leaders can take swift action on. Voters demand it and all Nassau residents deserve government that works in their interests, not those of party bosses."

Susan Lerner, Executive Director of Common Cause New York, said, “Partisan gerrymandering hurts our democracy by dividing communities, entrenching incumbents, and discouraging political competition and participation. Here in Nassau, we have the opportunity to end gerrymandering for good by amending the county charter to establish a fair independent redistricting process, one that puts the interests of voters, not politicians, first.”

"We strongly urge our county legislators to demonstrate leadership and ensure the County Charter is reformed to protect the voting rights of all its residents," said Lucia Gomez, Executive Director of La Fuente-Long Island Civic Participation Project. "We stand ready to help them find an alternative to the current process and will work with them to make Nassau County a model for the state and nation."