Speaking Up for the Wet, Soggy and Weary

Yet another Nor'Easter, the eighth this season Post-Sandy, will bring yet more flooding to low land areas of Long Island's south shore, and to other communities in the tri-state area. 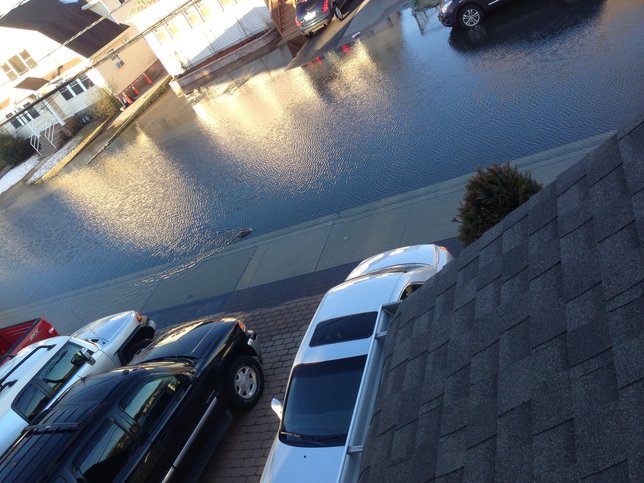 This Guest Post is brought to you by Carl LoBue, on behalf of Save the Great South Bay, and does not necessarily reflect the views & opinions of LongIsland.com and its staff.

The hearts of weather followers sank again this weekend as it became obvious that the east coast would soon experience another coastal flood inducing storm tonight into tomorrow.  That makes eight since Hurricane Sandy and with the full moon on Wednesday, this storm, like so many of the others this winter, is forecasted to hit at astronomically high tides.

Most of Long Island’s lowest elevation communities are along the south shore.  Since November 2012, people who live and work in these communities feel like they are in another country.  Most of the homes are dark at night.  Many have dumpsters or pods out front.  While some are under construction, many are still awaiting insurance claims and rebuilding plans.  The combination of chronically flooded streets and debris set against brown salt burned foliage seems uncharacteristic of Long Island’s picturesque coastal communities.

But buildings and foliage don’t feel anxiety, people do, and we are struggling.  Residents and business owners are universally concerned, wet, and unsure about their future.  It’s become hard to enter any conversation that is not eventually steered towards tides, floods, repairs, insurance or FEMA.  Should we rebuild?  Should we elevate our home?  Could I even sell my home if I wanted to?  Why isn’t the Government implementing a plan to stop the flooding?

It’s that last question that really strikes a nerve because after tomorrow it will be eight storms since Sandy and people have been pushed to the edge.  Many would pay any price to someone who claims they have a plan that will keep the water from coming up.

This past Saturday afternoon Dr Charlie Flagg of Stony Brook University a presentation to a packed auditorium at the Bellport Middle School. Physical oceanography is not typically a captivating topic, yet Dr Flagg kept the audience riveted for an hour as he discussed concerns that the Sandy induced breach in Fire Island Wilderness Area was to blame for flooding communities along the south shore of Long Island.

Spoiler Alert – the flooding experienced on Long Island during and since Sandy has been a result of a parade of large coastal storms that have been affecting 1,000 km of coastline from Virginia to Massachusetts.  The data is irrefutable; despite suggestions to the contrary by some local officials, the breach is not the cause of the flooding, and thus spending millions of dollars to close it won’t stop or even reduce the flooding.

Dr Flagg’s presentation was thorough, making it hard to sensibly refute the findings, and they hardly refute the observations that low lying communities all along Long Island are repeatedly flooding this winter are very real, with residents are at their wits end.

The natural reaction of some flood victims present at Saturday’s Bellport audience was “this can’t be sea level rise, that’s happening slowly, not all of a sudden – it must be connected to something that’s different since Sandy”.  After the breach implications were refuted, one woman turned her attention to the flattened dunes on the County park barrier beach directly across Narrow Bay from Mastic peninsula. She observed that since Sandy, during big storms you can see the high surf and overwash, so if it’s not the breach causing the flooding then it must be the lack of high dunes.  The conclusion is then to spend tens of millions of dollars to rebuild dunes in the undeveloped stretch of Suffolk County parkland in order to stop flooding of the mainland.

Although at first brush this seems plausible, this too misses the point.  Something is different since Sandy – and the difference is that by Wednesday we will have had eight large coastal storms, each of which has elevated ocean levels along the entire coast of the Mid-Atlantic though Southern New England.

When the ocean swells for more than one tidal cycle as it does for these large coastal storms, then the water levels in the bays will follow regardless of the size and number of inlets or the size of the sand dunes on the barrier beaches. High water levels won’t cause damaging floods everywhere, but rather they will continue to hit the most low lying and vulnerable communities. Most of us know them by name, Mastic, Freeport, Lindenhurst etc. Although we now have super accurate data on ground elevation, the people in these communities don’t need to see LIDAR maps to know exactly which buildings and streets are most in harm’s way – they just need to look out the window tomorrow at high tide.

It’s human nature to believe we can engineer our way out of anything.  However, anyone telling us that they have a plan that will stop the ocean and bay from rising and flooding the lowest lying areas during storms is completely misleading us. Even making that assertion is dangerous because now is a time that we cannot afford to be distracted, dishonest, or wasting money that is desperately needed to truly help families deal with the very real issues of chronic and increased flooding.

We all hope we will never see another Sandy, or even another winter with eight large coastal storms. But we need to accept that although some winters, like last winter, are quite pleasant, we are more likely than not to have at least a few of these moderate to large coastal storms each year. Those of us whose homes or business have repeatedly flooded during this seasons nor’easters should be demanding that our public officials not waste our one shot at getting federal assistance on frivolous and conceptually flawed plans to keep the water from rising, but rather spend the money implementing programs that help coastal communities and families become more resilient.  Future floods are inevitable.  We must therefore take steps to assure that unavoidable floods are no longer human and economic catastrophes, but rather simple inconveniences that are the price we have to pay to live right next to the bays we love so much.

For many this will come in the form of elevating homes and driveways, upgrading waste water connections or septic systems, and modernizing back flowing storm drains.  These are expenses that many of our residents and communities are not equipped to handle without assistance.  It’s time for both residents and officials to be honest and get serious so that we smartly spend the Sandy relief funds.  Even the most optimistic of us knows that we are unlikely to ever again have a financial relief package of this magnitude targeted to this issue.


The author, Carl LoBue, Sr. Marine Scientist for The Nature Conservancy on Long Island has many family and friends struggling with how or if to rebuild after Sandy.

About the Photo: Water in the streets of Freeport, Long Island have become more common lately - yet this merganser swimming down the street on March 9th caught the photographer's eye. Photo taken by R. Weltner.