Down Port and at the Strip Mall: Day Two of my LI Beer Tour

Day two of the Long Island Brewery Adventure had me visiting a beautiful brewery in the heart of Port Jefferson and an established brewpub in a strip mall parking lot. 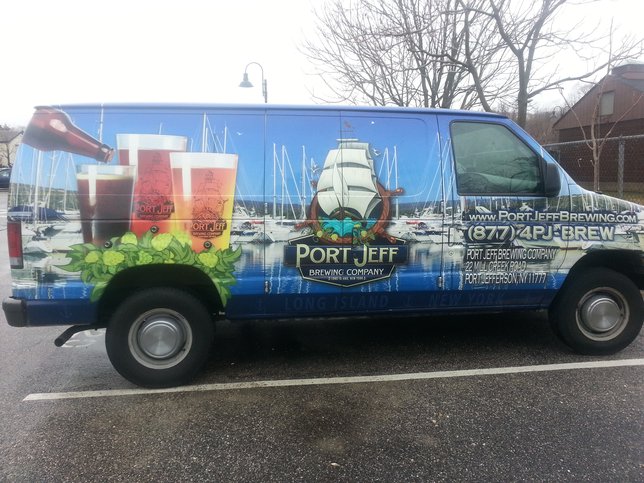 Mother Nature had decided not to cooperate with my desires for a warm and sunny spring break. The weather yesterday was, by and large, pretty rainy and miserable. The sun poked its head out of the clouds a few times later on in the afternoon, but otherwise, it was a gloomy last day of winter. This is no excuse for me to not get out and enjoy some of Long Island's finest craft beer, however, so I hit the road. Day two of my trip was highlighted by a trip to the fantastic Port Jeff Brewing Company, followed by a flight at John Harvard's Brew House.

The Port Jeff Brewing Company is in an optimal location, adjacent to the village's municipal parking and with a fine view of the comings and goings from the ferry and the eponymous harbor beyond. I can imagine the natural splendor of the Sound in the warm summer months, but for now, with winter stubbornly holding on, it just seems a bit cold and desolate. The brewery does a great job, however, of co-opting the nautical motif of a busy seaside port into their taproom and also the beers themselves.

Dan, the tap master during the visit, was great. We talked a little bit of shop, discussing the Long Island brewery scene as well as the idea of a cohesive New York beer culture. This is one of greatest aspects of beer. It is inherently a conversation-builder, a point of reference between strangers who quickly become friends. That's why this adventure across New York has been so fun and enlightening, and why I want to keep going.

As was recommended to me, I started with this year's iteration of the Ryes-N-Bok. This beer has a grain bill of 30% rye, and it shows. It's also fermented with Weinenstephan Weizen yeast, which provides a banana-like sweetness that mellows out the strong rye character. There is also a relatively pronounced hop character, reflective in the 68 IBUs. At 7% alcohol,  it is stronger than its taste betrays. And, because it's unfiltered, it retains some vitamins from the yeast. This beer is just about perfect.

I moved next to the Cold North Wind, Port Jeff's Winter Ale. During a severe snowstorm a few years back, the brewers decided to craft a new beer from the ingredients they had on hand in order to ride out the blizzard. Using a little bit of this and a little bit of that, they made a beer that has the potential to be a barleywine if aged. It is a bit sour, but smooth on the back end. The hop character isn't as pronounced as the 62 IBUs seems to indicate, and at 8.5% alcohol, you should be feeling nice and warm after a pint or two.

Next up was the H3 Tripel, which was the first collaborative effort between the brewmaster and the head brewer. This beer has a tremendous grain bill and a high original gravity, which is readily apparent in the taste as well as the alcohol percentage, which tops 10%. It's an impressive beer. There isn't much hop character at all, just the sweetness of a traditional Belgian Tripel. This one will sneak up on you. Take caution.

I asked for the Schooner Pale Ale next. This is Port Jeff's flagship (get it?) brew. It's a traditional English-style pale ale, as opposed to the hop bomb American-style ones, and has a subduded hop bitterness that allows for a smooth mouthfeel and only the slightest bitterness at the finish. A combination of Pilsen and Pale Malt constitutes the grain bill, with East Kent Golding Hops providing the slightest bit of hop character. At 32 IBUs and 6.5% alcohol, this one is easy drinking.

I moved then into the darker, more luxurious beers. Of the remaining two beers, the Port Jeff Porter was my first. This is a solid example of the style. The roast chocolate malt provides the appropriate hint of smoke and sweet, which, combined with local honey, brings this porter into the realm of excellence. The other half of the grain bill was regular pale malt, which mellows the beer at the back end, leaving the taste of coffee and chocolate on the tongue. It's really good. Treat yourself to a pint, or, even better, a growler.

The last beer for me to try was the S.O.S. Oatmeal Stout. I've become a big fan of oatmeal stouts as of late, especially when the execution is flawless, as it is in this case. This beer is a beast. Like the porter, it combines pale and chocolate malt, but in much greater quantities, leading of course to a much higher alcohol percentage, at 9.2%. It also throws an oatmeal curveball, with 10% of the grain bill constituted with what would otherwise be breakfast. During fermentation, the brewers add brown sugar and raisin, which the yeast gleefully converts to alcohol, leaving behind the faintest bit of sweetness. This is the beer I opted to growler-ify for to enjoy later.

Overall, the Port Jeff Brewing Company was a great stop during my journey. These guys are doing something magical down port. and it shows in just how rapidly they are growing. From a mere 30 accounts around this time last year to sending kegs and bottles to restaurants and bars across Long Island and in New York City, success has touched this brewery and will continue to do so. I wish them all of the best and look forward to visiting again.

I visited the John Harvard Brew House immediately after. It's a short drive down 347 from Port Jeff. I realized, when seeing the brewpub, that it's a corporatized affair. The location is in the center of a strip mall parking lot, with a basic red letter sign marking the establishment. I opted for the flight, which is my tradition when visiting a new brewpub. I tried the Barbarian Bock, the Anti-Spice, the Celtic Red, the Double Trouble Bock, and the Creamy McStout. Check back to my blog later for a full review of the beers at John Harvard's. Spoiler alert: the best one, by far, was the Creamy McStout. It's essentially irish cream in beer form.

Today, I'm visiting Barrage Brewing Company and the Black Forest Brew Haus, both in Farmingdale. Follow me live on Twitter @InTheNameOfBeer and be sure to check out my blog inthenameofbeer.com to learn all about my #LIBrewTrip.