In the wake of Hurricane Sandy, the Red Cross has set up five feeding stations on Long Island spread out through Nassau and Suffolk Counties.

The American Red Cross has opened five emergency feeding stations in Nassau and Suffolk County, with plans to keep them open through the weekend as Long Islanders continue to recover from Sandy.  The Red Cross will also be making shipments of food and emergency supplies to some of Long Island’s worst stricken areas on the South Shore. 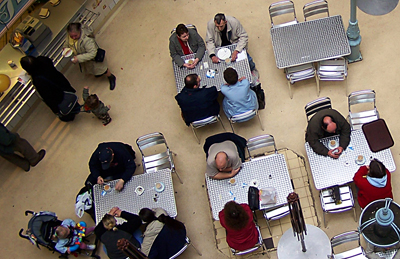 On Friday, Long Islanders will be able to catch a hot meal between 11 a.m. and 2 p.m., and again from 4 p.m. to 6:30 p.m. at the H. Lee Dennison Building at 100 Veterans Memorial, Hauppauge;  the Riverhead County Center at 210 Center Dr., Riverhead; Mastic Fire House, 1080 Mastic Rd.; Cedar Creek Park at 3340 Merrick Road in Seaford; and at Nickerson Beach Park, 880 Lido Blvd. in Lido Beach.
Critics have complained that Staten Island, one of the most devastated areas where19 are known dead and the death toll is rising, has not yet received appropriate aid from the Red Cross.  On Thursday, Borough President James Molinaro called the response by the Red Cross an “absolute disgrace,” and asked the public to donate to other relief organizations.
Molinaro, in an interview with NBC, described the scene on Staten Island Monday night as residents sought shelter: “People were coming in with no socks, with no shoes. They were in desperate need. Their housing was destroyed. They were crying. Where was the Red Cross? Isn’t that their function? They collect millions of dollars. Whenever there’s a drive in Staten Island, we give openly and honestly. Where are they?”
Recovery crews still expect to uncover bodies in the devastation, which has been coated in gas, oil and sewage.  Unofficial reports say that the Red Cross is sending a massive mobile feeding station to Staten Island expected to arrive on Friday.
For more information on how to get assistance after Sandy, check out our Post-Hurricane Guide.
Share your thoughts on this article by posting a comment below or visiting our Long Island Living discussion forum.