Schumer: Statue Of Liberty To Reopen By July 4th

Repairs Progressing on Docks, Energy Infrastructure, and other Facilities Damaged by Hurricane Sandy. 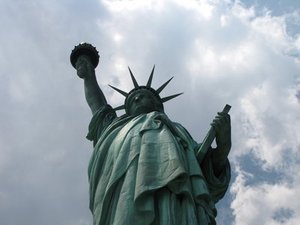 “Hurricane Sandy inflicted major damage on facilities that support the Statue of Liberty – destroying the docks, crippling the energy infrastructure on Ellis Island and wiping out the security screening system – but we are fully committed to reopening this crown jewel as soon as it's safe for visitors and not a second later,” Secretary Salazar said. “Based on the tremendous progress we have made, Lady Liberty will be open to the public in time for the July 4th celebration.”

"July Fourth is the perfect day to reopen a symbol of our nation's freedom, and speaks volumes about New York's resilience," said Senator Charles E. Schumer.  "Lady Liberty was hit hard by Superstorm Sandy, but just like New York, she will be back – and stronger than ever. Being open for the summer tourism season isn't just important symbolically, it's a boon to the city's economy and businesses, as the statue attracts millions of tourists from all over the world to our shores.  I thank Secretary Salazar for his extraordinary work – he was uncommonly focused on getting this job done, and the people of New York appreciate it."

“My close friend and former colleague Secretary Salazar has been a true leader in protecting and showcasing Lady Liberty,” said Senator Robert Menendez. “We worked together to address safety and security concerns to reopen the crown and now he has helped bring this national treasure back after Superstorm Sandy.  The Statue of Liberty will stand as a symbol of the whole region rebuilding even better and stronger after the storm.”

Salazar emphasized the importance of reopening the Statue to the New York economy. An annual report released last month by the National Park Service showed that 3.7 million people visited the park in 2011, generating $174 million in economic activity and supporting 2,218 jobs.

“Across the country, our national parks are economic engines for local communities, with visitor spending providing a $30 billion benefit to the economy,” said National Park Service Director Jonathan B. Jarvis. “By moving forward quickly with the repairs at the Statue of Liberty, we are giving a boost to communities here in New York who have been so badly hurt by Hurricane Sandy.”

Repairs to the docks needed to transport visitors to Liberty Island are being funded by the U.S. Department of Transportation’s Federal Lands Highways Program, as part of $28 million committed to roads and bridges in federal parks and recreation areas in New York and New Jersey damaged by Hurricane Sandy.

Three days after taking office, Salazar visited the Statue of Liberty in January 2009 to announce that the crown, which had been closed following the terrorist attacks of 9/11, would be re-opened to the public by the following July 4th.

“I fully expect that once again we will meet the July 4th deadline to reopen Lady Liberty, thanks to the commitment and hard work of the National Park Service staff, the Department of Transportation, and our many local and state partners,” Salazar said. “As we rebuild the region, we will do so in a way that makes New York and New Jersey stronger, safer and more resilient than ever before.”