Coney Island Gets New Roller Coaster, Thunderbolt Coaster to Be Ready for the Summer

Thrill seekers, get ready for a new ride coming to Coney Island! The Thunderbolt coaster will take riders as high as 115 feet before making a 90-degree vertical drop. 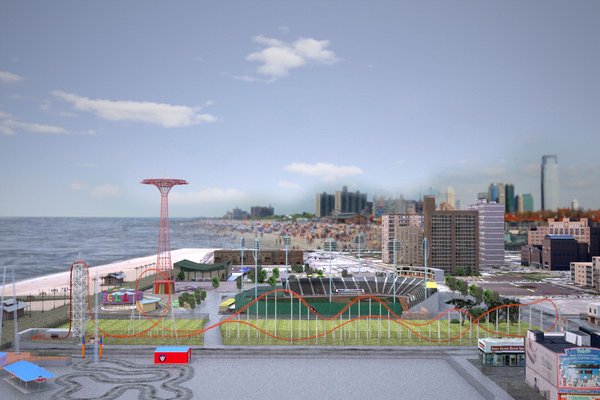 On Monday, ground broke for the construction of a new roller coaster at Coney Island. The Thunderbolt is the first steel custom roller coaster Coney Island will see since the Cyclone debuted in 1927. The new coaster is expected to be open to riders by Memorial Day weekend.

The Thunderbolt will stand 45 feet wide and 800 feet long with three cars, each holding up to nine passengers.

The new roller coaster will be located in Luna Park, offering 2,233 feet of track. Those going along for the ride will experience a 115-foot vertical drop, a 100-foot vertical loop and five inversions.

“For a decade, the City has made investing in Coney Island a priority,” according to New York City Economic Development Corporation Executive Director Kyle E. Kimball. “The Thunderbolt roller coaster will build upon that commitment by providing visitors to Coney Island with a fantastic new attraction, boosting the local economy and helping create jobs in the neighborhood still recovering from Hurricane Sandy.”

The thrill ride will cost $10 million to build.

The new roller coaster will be operated by Central Amusement International, which also operates Luna Park.

Coney Island goers this summer can expect a re-energized theme park on top of its other roller coaster – the Cyclone – and many other amusement rides and attractions.