After Superstorm Sandy, many beachfront locations are looking at this Independence Day holiday to relaunch businesses. Some places like Coney Island continue to face hurdles. 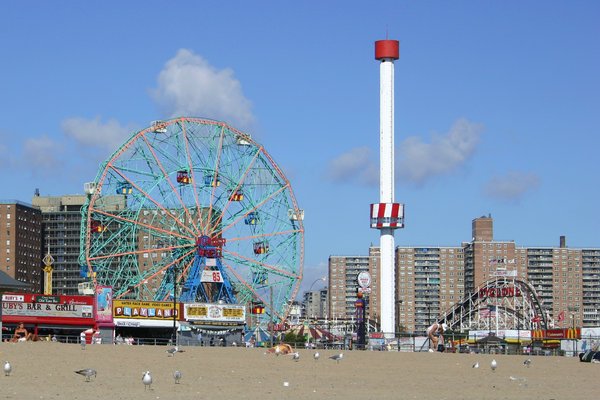 Coney Island, like many other beachfront locations on Long Island, was impacted by Superstorm Sandy. This Independence Day is an opportunity to re-launch businesses and make up for lost business, but there was another hurdle to overcome right before the holiday hit.

The 50-year old Astroland observation tower that stood about 270-feet tall was observed swaying earlier in the week. It was deemed unstable by the Department of Buildings and New York’s Office of Emergency Management. This caused Luna Park to be evacuated on Tuesday afternoon.

To make Luna Park safe for visitors this fourth of July, the Astrotower needed to be stabilized – meaning there were crew working overnight and into the morning dismantling parts of the tower. By shortening the tower, it mitigated the risk of it collapsing.

The dismantling of portions of the tower allowed for Luna Park to reopen to the public by 3 p.m. on the holiday.

The tower has been cut 53 feet so far. There are plans to continue dismantling the tower over the course of the next several nights when the park is closed, according to DOB Commissioner Robert LiMandri.

While the tower was being dismantled, businesses at Coney Island impacted included the Cyclone roller coaster, the Wonder Wheel and a two block section of the boardwalk.

Some officials have noted the tower has always swayed, but it was more pronounced this time around after an elevator had been removed from the tower over the winter. The removal of the elevator decreased the overall weight of the tower, which is believed to have caused the tower to sway even more.

The Astrotower was built in the 1960s. It served as a two-story observation deck. It ceased operation in 2008 and there were plans to convert the structure to a light tower, but now those plans are in question until it is determined how much of the tower will need to be removed, according to reporting from The Wall Street Journal.