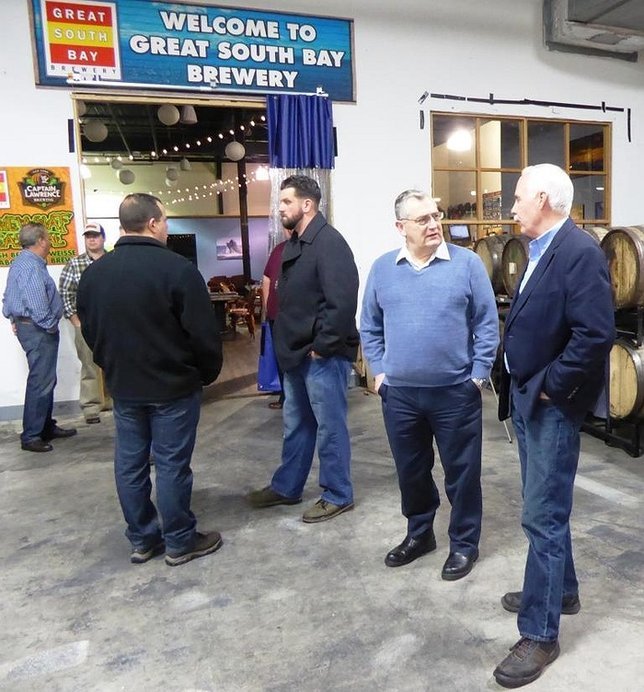 In February, Suffolk County Legislator McCaffrey (far right) attended a meeting at the Great South Bay Brewery facility to discuss the plans for the proposed brewery incubator with members of the Town of Babylon’s economic development team.

Copiague, NY - March 8th, 2016 - U.S. Senator Charles E. Schumer today called on the U.S. Economic Development Administration (EDA) to provide $1 million in federal funding to help jumpstart the Babylon Brewery Incubator Project in Copiague, which would be the first-of-its-kind in New York. The Town of Babylon Industrial Development Agency (IDA) plans to transform a blighted warehouse into a brewery incubator that will provide micro-breweries with the opportunity to develop their brand.

The Town of Babylon IDA recently submitted their preliminary application for the federal EDA funds. Schumer says the EDA should support the IDA’s proposal because the project will help grow the businesses of local brewers, many of whom operate in garages and don't have the resources to expand, and be a boon for the local Babylon community, like Copiague and Lindenhurst. Schumer said that if this project moves forward, Long Island could become the brewing mecca of New York.

"Senator Schumer's support and the EDA's funding are vital to the future of the incubator project.  I want to thank the Senator for his support, because without it, this highly anticipated economic and community development project would not move forward.  I look forward to working with Senator Schumer in the months ahead to make this first of its kind incubator project a reality, said Matthew T. McDonough, CEO of Babylon IDA.

"This is an exciting project that will support micro-business owners and spur innovation in an industry exploding with growth across the region," said Babylon Town Deputy Supervisor Tony Martinez.  "On behalf of the Town, and the community eager to revitalize this property, I thank Senator Schumer for his enthusiastic support and advocacy."

The Town of Babylon IDA recently submitted a preliminary application requesting $1 million in EDA funds to help jumpstart its proposed Babylon Brewery Incubator Project. The EDA’s mission is to promote innovation, entrepreneurship and competitiveness in the American economy. Schumer explained that the EDA does this by providing grants to state and local governments as well as economic development councils, public and private non-profit organizations, universities and other institutions that support the development and implementation of economic development projects, typically in economically distressed communities.

The EDA operates under the basic principle that communities must be empowered to develop and implement their own economic development and revitalization strategies. The EDA works directly with local economic development officials to make grant investments that are well-defined, timely, and linked to a long-term, sustainable economic development strategy. Schumer noted that EDA grant funding has been helpful in paving the way for new businesses or incubators to come into a community, by providing the federal funds needed to make an initial infrastructure investment that is required.

Schumer today explained that New York is home to a strong micro-brewery industry and that the Town of Babylon’s proposed project would help further this industry on Long Island. In New York, the beer industry directly supports approximately 8,000 jobs through brewing and distribution, and nearly 60,000 jobs overall when retail sales are factored in. These jobs paid $2.1 billion in wages in 2010, and accounted for $5.3 billion in economic activity. According to the New York State Brewers Association, the number of New York State breweries grew from 95 in 2012 to 207 in 2014.

There are at least 27 breweries on Long Island. Schumer pointed to Blue Point Brewing Company, which began in the 1990s as one of the first craft brewery’s on Long Island and now produces tens of thousands of barrels each year. Long Island breweries like Greenport Harbor, Great South Bay, Fire Island, Long Ireland, Southampton Publick House Brewing Companies all started as local breweries and are now sold regionally, some nationally.

Schumer said that the Babylon Brewery Incubator Project could help propel the micro-industry both on Long Island and in New York as a whole and provide brewers the opportunity to move their operation out of their garage and into a real brewery. Schumer said that the proposed project will also create jobs and be a boon for the local downtown business areas of Babylon.