Suffolk County Legislator Kevin McCaffrey (R-Lindenhurst) recently participated in a meeting of the Town of Babylon’s economic development team, which was held at the Great South Bay Brewery. 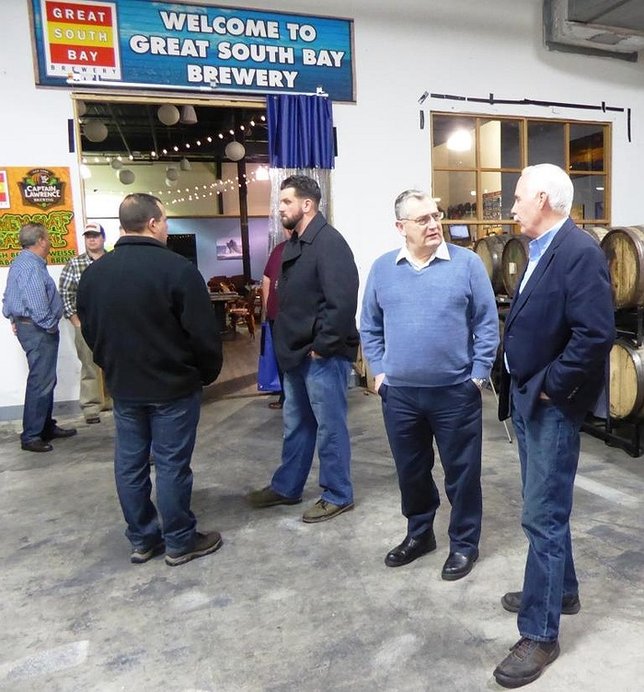 Bay Shore, New York - February 22nd, 2016 - Suffolk County Legislator Kevin McCaffrey (R-Lindenhurst) recently participated in a meeting of the Town of Babylon’s economic development team, which was held at the Great South Bay Brewery.  The purpose of the meeting was to not only gather members of the team, but a variety of local stakeholders, in order to discuss the plans and merits of a brewery incubator in the Town of Babylon.

Lately, the craft beer industry has enjoyed exponential growth in various communities across the United States. Long Island, in particular, is the home to a number of craft beer labels, such as those produced by the Great South Bay Brewery.

Many locally brewed labels have earned nationwide appeal, and in some cases (such as Blue Point) have even been acquired by major beverage distributors.  Despite the possibility of a label being acquired by a large conglomerate, having an established and diverse craft beer industry on Long Island can fuel the economy for the long term.

In order to facilitate the growth of the craft beer industry, the Town of Babylon’s economic development team is considering to locate a brewery incubator on a blighted piece of property in Copiague. By locating the brewery at this proposed site, an eyesore will be removed, tax revenue will once again be generated, and future brew masters will have the opportunity to ply their trade.

“I think the Babylon Brewery incubator is a great idea, for both the Town of Babylon and all of Long Island,” said McCaffrey.  “This incubator can really be the ushering in of a substantial industry here in Suffolk County.  Not only will this create jobs, but maybe even increase tourism, both of which are very good things for the economy.”

The proposed site is located at 1305 South Strong Avenue, and was for many years the home of a defense contractor which tested parts for missiles.  At this site, the IDA plans include a massive renovation of the structure which would ultimately provide incubation opportunities for a maximum of ten craft brewers. Additional amenities would be available to the brewers, such as a tasting room, similar to the one at the Great South Bay Brewery.

“Jobs and industry are so desperately needed here in Suffolk County,” added McCaffrey.  “This is a tremendous opportunity for economic growth that we must fully embrace, and the time is now.”

For those interested in learning more about the proposed Babylon Brewery, they are strongly encouraged to visit its website.  To learn more about the Babylon IDA, please visit their website.