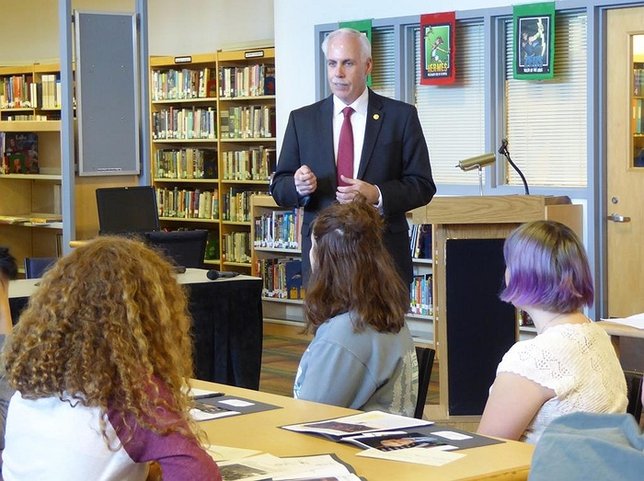 Babylon, NY - March 4th, 2016 - Suffolk County Legislator Kevin McCaffrey (R-Lindenhurst) recently held a “Student Press Conference” which took place in Babylon High School’s library.  The event was attended by students from the classes of Mr. Ryan and Mr. Skaar, who both saw this as a unique real-world teaching opportunity.

The purpose of holding an event such as this is to provide students with a chance to have a direct and open line of communication with an elected official from their community.

Also, by arranging the official’s appearance as a press event, students can learn how the media interacts with our government.  It is hoped that this exposure will inspire some students to consider journalism as a career and/or simply become more involved in civics.

“Elected officials very often talk about issues related to young adults, but do not provide a platform for open and honest discussions,” said McCaffrey.  “Our young people here in Suffolk County are just too important, and they deserve to be heard.”

Prior to the event, students formulated their questions based on their own unique set of interests and concerns. Although the process was assisted by their teachers, the students’ questions were not heavily restricted as to their form or content.

This preparation ultimately facilitated a lively conversation filled with a variety of topics ranging from environmental issues to job creation.

“There are many challenges that are in Long Island’s future,” added McCaffrey.  “Whether it is keeping our water clean or fighting drug abuse, or a host of other issues, these students are a crucial part of the dialogue. I was impressed by the depth of their understanding and sincerity of their concerns.”

In these trying economic times, schools have been increasingly focusing on providing innovative learning opportunities for students, which often involves going outside the four walls of the classroom.

Babylon High School’s educators and administrators clearly recognize the enormous challenges ahead, as they are tackling them head on to ensure the success of their students well into the 21st century.