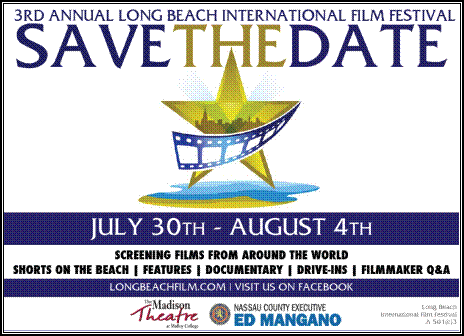 Long Beach, NY - March 4, 2014 - Nassau County Executive Edward P. Mangano announced today that the Long Beach International Film Festival (LBIFF) will begin on July 30th 2014, and will extend into a six day long festival. The LBIFF is currently accepting online submissions in all categories for the “Shorts on the Beach” series, as well as features, live action, animation, drama, comedy, thriller, horror, sports, and documentaries. Sponsored in part by the City of Long Beach and Nassau County, “Shorts on the Beach” film series is a free screening of short films on the beach and under the stars. Blankets and chairs are welcome.

County Executive Mangano stated, “Nassau County has quickly become the Hollywood East of the film industry and supports independent and studio films. It is our pleasure to bring entertainment and cultural opportunities to residents and this film festival will truly be acelebration of film in the City by the Sea.”

Last year’s International Film Festival had a great outpouring of support from Joan Jett, Dee Snieder, Burt Young and UFC Champion Chris Weidman. As the LBIFF approaches their 3rd year, it willfeature a drive in movie at Nickerson Beach. They will also be screening feature films at the Madison Theatre at Molloy College. This is a wonderful addition to the festival, and especially exciting due to the fact the Long Beach Theatre is still closed due to hurricane Sandy. County Executive Mangano has long been focused on bolstering the television and motion picture industry in Nassau County. The former United States Navy-Grumman Corporation property in Bethpage is now home to successful production studios that encompass three buildings and nine sound stages.

Movies and television shows are now being filmed in Nassau County on a regular basis, resulting in $144 million in economic benefit to the local economy. To stay on this path and aid in our economic recovery, the Nassau County Film Commission hosted a Film Friendly Nassau County Location and Studio Tour for the past three years. This business-friendly model encourages the industry to work in the region and create jobs in Nassau County.

"The Long Beach International Film Festival continues to provide an opportunity for filmmakers to come and see the types of filming locations Nassau County has to offer whether it be our beaches, mansions, suburban areas and, of course, Gold Coast Studios and Grumman Studios, which are all New York State-approved movie studios which qualify for the much sought after 30% tax credit,” said County Executive Mangano.