Behind the Scenes of "Send No Flowers," the Film that Swept the Long Island International Film Expo 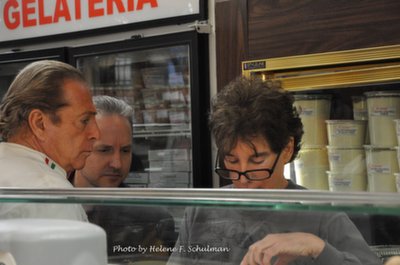 On the opening night of the Long Island International Film Expo, seats to see the world premiere of “Send No Flowers,” the mafia film that turns gender roles on its head, were completely sold out.

“I’ve done almost twenty independent films, and this had the biggest buzz,” said director Fred Carpenter, of Shirley.  “I think it’s all about Sean Young”

Young, known for her roles in “Bladerunner” and “Ace Ventura: Pet Detective,” plays Toni Albano, the daughter of an aging mobster who runs the city.  When her father, played by Tony LoBianco, is murdered, Toni takes over the family business of organized crime and takes on the mob boss who had her father killed, all while being the only woman of power in the boys’ club that is the mob scene.

The film, written by Lee Kolinsky, swept the awards night, and won for Best Long Island Feature Film and Audience Favorite. Russ Camarda, who plays Gaetano Logudice, was also named Best Actor and was awarded Best Editing for the film.

“Great actors are important an independent film so that the audience is never taken out of the moment,” commented Carpenter, who used plenty of local talent, including Robert Clohessy.  Carpenter kept true to his Long Island roots and filmed in nearby Baldwin, Merrick, Malverne, and Old Brookville. He also brought in Jackie Martling, a longtime staple of Long Island comedy clubs.

In the film, Martling, a former writer for the Howard Stern Show, plays an Irish gangster and strip club owner named Carney.

“It's wild that I played Carney… because about five years ago I played a strip club owner in ‘Hack,’ a TV show about a Philadelphia cab driver who solves crimes that starred David Morse,” said Martling.  “I guess what I brought to the role was the tons of experience I garnered doing my three lines in that episode of ‘Hack.’”

Martling was also impressed by Fred Carpenter, who is known for being a prolific director with several popular indie films under his belt, including “The Night Never Sleeps” and “Blue Lizard.”

“I was sent Fred Carpenter's previous film, "The Night Never Sleeps," and I liked it a lot. Then I was sent the "Send No Flowers" script. I read it and loved it. Fred, the director, and Russ Camarda, the editor and one of the stars… asked me to meet with them, and a minute after we sat down I knew I liked them both a lot and that I was in.”

More of Carpenter’s films can be seen for free at idriveinmovie.com.