After being hit by a large swell, a tugboat sinks and the barge it was towing ends up being sent ashore on Silver Point County Park in Atlantic Beach. 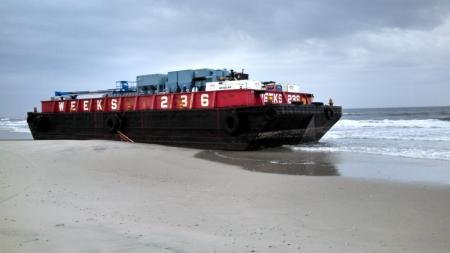 A 125-foot barge being towed by a 26-foot tugboat has ended up grounded at Silver Point County Park in Atlantic Beach. The incident occurred after a 10-foot swell broke the tow line. The tugboat eventually sank as the barge was sent onto shore.

The incident occurred at about 7:30 p.m. on Monday, according to the U.S. Coast Guard. There were three men aboard the tugboat who were rescued by another nearby tugboat and one person aboard the barge who was rescued by an NYPD helicopter. No injuries were reported.

The tugboat, named “Pushy,” was towing the barge that was carrying construction equipment from the Robert Moses Causeway Bridge to the Weeks Marine Shipyard in New York City. The barge was being used to sandblast and paint the bridge.

Officials are now seeking to remove the barge from the beach by waiting for high tide to come in on Wednesday morning and pulling it back into the water with another tugboat.

The Coast Guard has indicated there’s no evidence of threat to the marine environment as a result of this incident.

An investigation continues as to the exact cause of the separation and the sinking of the tugboat.