For the first time since Superstorm Sandy, and after hundreds of repairs, the Long Beach branch of the LIRR will be operating with electric service at a near-normal schedule.

For the first time since Superstorm Sandy’s historic flooding caused severe damage, the MTA announced that it began restoring partial electric service to the Long Beach branch on Sunday.  The first train headed to Long Beach station departed Jamaica at 1:32 a.m. on Sunday, a notable milestone after nearly a month without service. 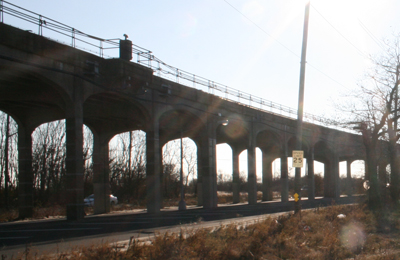 The Long Beach branch was the last of the Long Island Rail Road’s 11 lines to return to service following Superstorm Sandy, and the most severely damaged during the storm.
Trains will be operating on a regular weekend schedule on the line, with eight additional “holiday” trains scheduled, half travelling eastbound and half westbound.  Four trains will be cancelled from both the morning and evening peak schedules, as temporary signals in the two flooded East River tunnels allow fewer trains to operate from Penn Station.
Gov. Cuomo announced the restored service on Saturday.  “The Long Island Rail Road’s Long Beach Branch was not spared the devastation that was brought upon Long Beach and the surrounding communities by Sandy,” Governor Cuomo said. “I commend the intensive efforts made by the LIRR to clean, repair and replace the critical components in the flood-damaged electrical substations and signal equipment to restore the vital transportation link the Railroad provides as these hard-hit communities begin to rebuild.”
The Long Beach branch suffered extensive saltwater damage, and required replacement of approximately 1,000 electrical signal components, including 150 transformers, 350 relays, and 73 impedance bonds.  Replacing these components required crews working 24 hours, and additional work is still required.  The LIRR will continue to develop means to protect the system from future weather events like Superstorm Sandy.
Regular fares will be in effect on Monday.  Check here for full details on LIRR schedules and updates.
Share your thoughts on this article by posting a comment below or by visiting our Long Island Living discussion forum.