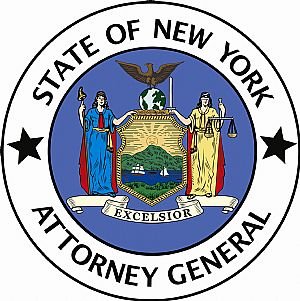 New York, NY - March 3, 2014 - Attorney General Eric T. Schneiderman today joined Bronx Congressman José E. Serrano and NYPD Commissioner William J. Bratton in announcing new legislation, introduced by Congressman Serrano in the United States House of Representatives, that would require a kill switch on smartphones to deter thieves and help end the violent epidemic of smartphone thefts. Attorney General Schneiderman also announced today that Commissioner Bratton has joined the Secure Our Smartphones (S.O.S.) Initiative, an international coalition of prosecutors, police chiefs, attorneys general, public officials and consumer activists working to encourage the smartphone industry to implement meaningful solutions to stop the epidemic known as “Apple Picking” – the theft of popular mobile communications devices such as smartphones and tablets. The House bill announced today follows the introduction of a similar bill announced last month by Senator Amy Klobuchar.
The announcement was made at an event in New York where Attorney General Schneiderman, Congressman Serrano and Commissioner Bratton were joined by Richard Aborn, President of the Citizens Crime Commission of New York City, and the family of Megan Boken, who was killed during a smartphone robbery in 2012.
“Since last May, the Secure Our Smartphones Initiative has challenged carriers and manufacturers to install technology that would end the epidemic of violent smartphone thefts. I applaud Congressman Serrano for bringing this to the floor of the House and putting the smartphone industry on notice: Because the industry dragged its feet, Congress is poised to act on legislation that will put consumers ahead of profits,” said Attorney General Schneiderman. “I also want to thank Commissioner Bratton for his decades of service and welcome him to the Initiative, which is helping to make our communities more secure and save lives.”
"It is time for smartphone carriers and manufacturers to get serious about protecting the safety and security of their customers," said Congressman Serrano. "This legislation will ensure that consumers are empowered to protect themselves by rendering their smartphones useless in the hands of criminals. This is the most effective way to deter smartphone theft. I thank Attorney General Schneiderman for his leadership on this important issue, and am happy to join him in this effort."
New York City Police Commissioner William J. Bratton said, "I am proud to be part of this global initiative that is focused on thwarting crimes mainly driven by Smartphone Theft.  The NYPD is committed to protecting the public and combating crimes that affect citizens who opt to utilize new technology as a form of communication.  This legislation appropriately calls for a collaborative effort amongst the cellphone manufacturers, consumers, and the law enforcement community in order to drastically reduce crimes associated with cell phone theft."
Senator Klobuchar said, “Cell phone theft has become a big business for thieves looking to cash in on these devices and any valuable information they contain, costing consumers more than $30 billion every year and endangering countless theft victims. This legislation will help eliminate the incentives for criminals to target smartphones by empowering victims to take steps to keep their information private, protect their identity and finances, and render the phone inoperable to the thieves.”
Richard Aborn, President of the Citizens Crime Commission of New York City, said, "Cell phone theft is a rapidly growing problem in New York and around the country--one which often involves violence and needs a serious response. The Crime Commission applauds Rep. Serrano on this important bill and Attorney General Schneiderman on his continued leadership preventing smartphone thefts and related crimes. Together with Commissioner Bratton, we now have partners taking action to stop smartphone theft and the violence it causes on all three government levels: city, state and federal. We encourage the Congress to act quickly on the bills presented by Rep. Serrano and Sen. Klobuchar in order to provide a useful deterrent and kill this troubling trend."
Even as most types of property crime are falling, in communities across the United States and the United Kingdom, the theft of smartphones has spiked dramatically. In the United States, one in three thefts involves a mobile communications device. Consumer Reports estimates that 1.6 million Americans were victimized by smartphone thieves in 2012.
Last year, 50 percent of robberies in San Francisco targeted such a device. In New York City, the number was 20 percent, a 40 percent increase from the year before. In London, although crime overall is falling, offenses such as pickpocketing and bag snatches have risen by more than 15 percent this year. This is mainly driven by the theft of phones, with some 10,000 handsets stolen in the city every month.
Street-level thieves feed a massive global marketplace for stolen phones that is too large or lucrative for any single community to stop. Mobile devices that are reported stolen in the United States and no longer able to access domestic cell networks can be reactivated to work in foreign countries. In Hong Kong, for example, iPhones are worth upward of $2,000 apiece.
Launched earlier last year, the S.O.S. Initiative is an international coalition of prosecutors, police chiefs, state and city comptrollers, and public safety activists co-chaired by Attorney General Schneiderman, San Francisco District Attorney George Gascón and London Mayor Boris Johnson. Members of the initiative are committed to pressing the industry to find an effective way to combat the rise of often violent robberies involving smartphones.
For more information on efforts by Attorney General Schneiderman, District Attorney Gascón and Mayor Johnson to combat “Apple Picking,” visit the San Francisco District Attorney’s website, the New York State Attorney General’s website or the London Mayor's website.