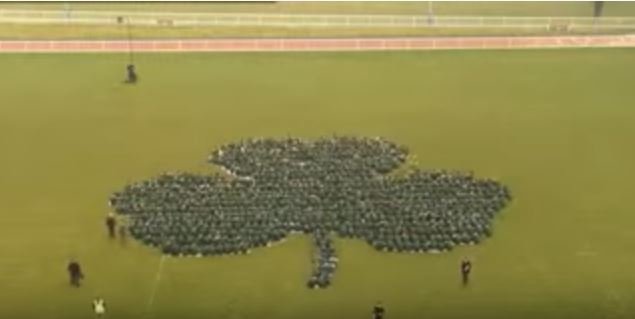 Two Farmingdale restaurants are putting together an event on St. Patrick’s Day this year to set a new Guinness World Record for the largest human shamrock. It’s also for a good cause.

The Nutty Irishman and 317 Main Street are inviting people 21-years-old and over to come out to Howitt Football Field on Saturday, March 14th at 3pm. For a $10 donation participants can get a free poncho, a free pint, and help break a world record. Proceeds will be donated to St. Baldrick’s Foundation. (Children are free to attend.)

Participants need to RSVP to be involved. Tickets are available here.

The official website for Guinness World Records says that the largest human shamrock involved 815 people organised by Blackrock College in Co. Dublin, Ireland on March 13, 2016. Last year, the city of Elmira, NY had 1,200 people create their own version of the human three-leaf clover but a technical glitch (they had gaps) meant that they did not get the official title. The city is trying it again this year and hopes to get more people to show up.

To beat the standing record, more than 815 Long Islanders need to show up for the Farmingdale event. But with such a strong showing from the Elmira folks, it’s looking like more than 1,600 people need to attend to gain the title. With a little luck of the Irish, Long Island might make everyone else green with envy.