In a 12-car crash, debris from one car flew into the stands and injured at least 28 fans. 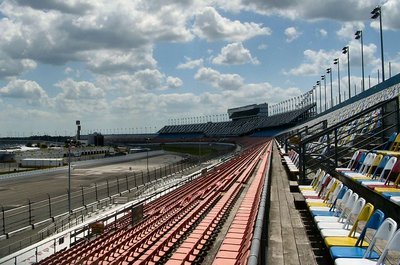 On Saturday, a 12-car crash in the last lap of a Nascar race at Daytona International Speedway became even more shocking when debris flew into the stands, injuring at least 28 people.

According to the Daytona International Speedway President Joie Chitwood, 14 people were brought to different area hospitals, and 14 others were treated at an infield care center at the speedway.

A spokesman at the Halifax Health Medical Center said that seven people were being treated there for injuries sustained from flying debris.  Two spectators are in critical condition, and one is a child.

The crash occurred when the pack of drivers approached the finish line, and suddenly the No. 32 car driven by Kyle Larson went airborne.  Larson’s car hit the fence meant to protect spectators in the stands, and the front-end of his car was ripped off, including two tires.  Metal shrapnel and both tires flew into the stands filled with Nascar fans.

One driver has already taken the blame for the accident, according to Nascar’s website.

“My fault,” said driver Regan Smith. “I threw a block. I’ll take the blame for it. But when you see the checkered flag at Daytona, you’re going to block, and you’re going to do everything you can to be the first car back to the stripe. It just didn’t work out today. Just hoping everything is OK, everyone who was in the wreck and all the fans.”

None of the 12 drivers that were involved in the wreck – including popular drivers Dale Earnhardt Jr. and Brad Keselowski – were injured.

The accident took place the night before the season-opening Nascar race- the Daytona 500.