Suozzi: "This about doing what is right, and I’m proud to join Congressman King in this bipartisan effort." 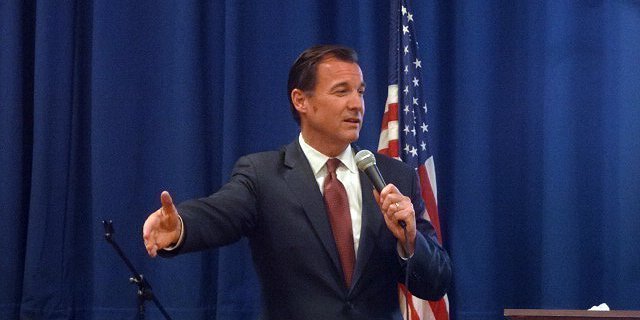 Glen Cove, NY - February 23, 2018 - On Saturday, March 24th, Congressman Tom Suozzi (NY-3) and Congressman Pete King (NY-2) will join Long Island high school students for a rally demanding action to stop the senseless mass shootings happening in schools across the nation.
“We are inspired by the teenagers and high school students who are standing up collectively and demanding ‘not one more,’ and we want to help them organize across Long Island and beyond. This is a young people’s movement and it’s our job as elected officials to shepherd this passion so meaningful action is taken at the congressional level to address gun violence prevention. This is not about Republicans and Democrats. This about doing what is right, and I’m proud to join Congressman King in this bipartisan effort,” said Suozzi.
“I am proud to work with Congressman Suozzi on this effort and will continue to advocate for policies that prevent gun violence and keep our communities and children safe. I have continually been a lead sponsor of legislation which would expand the current background check system and look forward to working with Congressman Suozzi to make sure it becomes law,” said King.
Each member supports H.R. 4240, the Public Safety and Second Amendment Rights Protection Act, which is being led by Congressman King and cosponsored by Congressman Suozzi. This bill would expand the existing background check system to include all commercials firearm sales, provide reasonable exceptions for family and friends, and preserve Second Amendment Rights. It would also offer states better federal funding if they maintain proper record-sharing systems that help report criminals and the dangerously mentally ill.
The rally will take place the same day as the “March for Our Lives” demonstration in Washington, D.C.
LOCATION:
Suozzi & King Rally to Demand Action on Commonsense Gun Legislation
11:00am, Saturday, March 24th
Nold Hall Gym
Farmingdale State College
2350 Broadhollow Road
Farmingdale, NY 11735