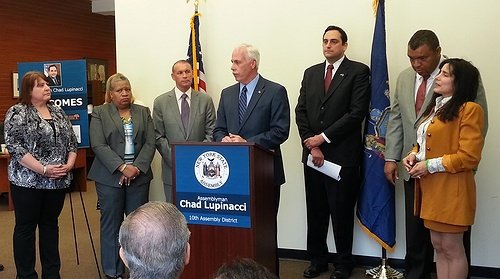 Huntington, NY - May 4, 2015 - Suffolk County Legislator Kevin McCaffrey (R-Lindenhurst) recently joined with his colleagues from state and local government, along with organ donation activists, to bring awareness to some disconcerting facts related to New York’s organ donor registry.  New York is currently ranked 50th with respect to the percentage of its residents who are registered organ donors; this is despite the overwhelming public support for organ donation efforts.

“The issue of organ donation may make some of us a little uncomfortable,” said McCaffrey, “but it is something that each of us should absolutely think about.  Many of us have the potential of saving a life – or even multiple lives – and all that is required is to register as a donor.”

During the press conference, Marie Lepersonerie shared a heartrending, but very inspiring story about how she honored her late son through organ donation.  Marie’s son, Sean Lepersonerie, an Iraq war veteran, was tragically killed while crossing a street in Babylon Village.  Marie ultimately decided to have Sean’s organs donated so that he may continue to help others, just as he loved to do during his life.  She explained that prior to losing her son, her family did not ever speak about death, and certainly not about organ donation.  However, despite initial misgivings about Sean becoming a donor, Marie and the rest of her family have found great solace in his gifts of life.

“As a parent, Marie’s story was extremely difficult to hear, but it was truly inspiring,” said McCaffrey.  “Marie’s son Sean already has given so much to our society through his honorable military service, and now more recently through his organ donation.  If this story does not inspire us all to immediately become registered donors, I do not know what will.”

McCaffrey was encouraged that all levels of government are working together to bring more awareness to this critically important issue.  “If we all work together,” said McCaffrey, “I have every confidence that in the near future New York can become number one in its percentage of registered organ donors.  Be a lifesaver and register as an organ donor today!”