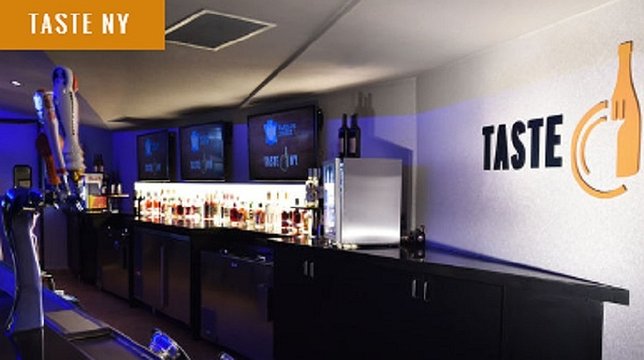 More than $13.1 million in sales in 2016 through Taste NY stores, concessions and events; Governor proposes expansion of Taste NY in 2017-18 budget to further strengthen State’s food and beverage industry and promote agritourism statewide.

“Taste NY continues to connect New York’s world-class farmers and food and beverage producers with New Yorkers hungry for locally made goods, as well as those across the nation and around the world who crave the high quality of Empire State-made products," Governor Cuomo said. “These sales numbers are proof positive of Taste NY's success and we will continue investing in this program to help create jobs and spur economic growth in businesses and communities across New York."

In November 2016, Governor Cuomo announced that sales had already surpassed $10.5 million, up from approximately $4.5 million in 2015.  With the addition of sales in the fourth quarter, sales for 2016 amounted to more than $13.1 million.

2016 Taste NY Expansion
The increase of sales in 2016 was supported by the addition of four new Taste NY stores and cafés last year. In addition, Governor Cuomo announced the first-ever Taste NY Bar at Barclays Center, home to the Brooklyn Nets and the New York Islanders.

Following that announcement, Taste NY partnered with the New York State Department of Parks, Recreation and Historic Preservation and Live Nation Entertainment to promote New York’s growing craft beverage industry through the launch of a second Taste NY Bar at Nikon at Jones Beach Theater.  Through its collaboration with State Parks, millions of annual visitors can also now enjoy locally-made products at both Jones Beach and Niagara Falls State Park.

Thanks to other partnerships in 2016, New York-made products are now offered on 13 Amtrak trains and at five Minor League Baseball stadiums in the State.  Participation in dozens of major events provided additional opportunities for New York’s agricultural producers and small businesses to showcase their products to large and diverse audiences.

Last year was the first-ever Taste NY presentation at the Barclays Golf Tournament at Bethpage State Park, which promoted dozens of New York farms and food and beverage producers during the four-day PGA event.

Expanding Taste NY in 2017
To build on the success of 2016 and further connect New York producers to new markets, Governor Cuomo’s 2017-2018 Executive Budget proposes support for Taste NY at new welcome centers across the State.

The Governor’s budget also includes expanding the sale of alcoholic beverages in certain venues, such as movie theaters, which will provide a boost to the State’s craft beverage industry. In addition, the Governor is proposing the launch of a first-ever New York Craft Beverage Week and a new grant for craft beverage producers to engage in joint marketing campaigns and enter products in national and international competitions.

State Agriculture Commissioner Richard A. Ball said, “Taste NY has given consumers an opportunity to better understand what the State has known all along—our local food and beverage companies are truly second to none.  Because of the strong, positive response to the Taste NY brand, agricultural producers and small businesses in every region of the State are growing, expanding their operations and adding jobs, and helping to strengthen the State economy.  I am thrilled with the success of Taste NY so far and I am excited to take the program to the next level in 2017.”

Senate Agriculture Committee Chair Patty Ritchie said, “In recent years, more and more consumers have taken an interest in ‘eating local,’ which has not just benefited New York’s overall economy—it’s provided a major boost to our hardworking farmers too. I have been proud to support efforts that help promote local foods, and would like to thank the Governor and Commissioner Ball for being keenly aware of the potential New York grown and produced products have to strengthen our state’s bottom line and continue moving its leading industry forward.”

Assembly Agriculture Committee Chair Bill Magee said, “The Governor’s Taste NY program has given increased visibility to outstanding New York State foods and beverages, and has helped to make those goods available to fill a growing public demand for fresh, local farm products. As the program continues to succeed and expand, so does New York agriculture; through increasing availability of products, success of participating farms and businesses, and support to consumers.”

David Fisher, New York Farm Bureau President, said, “New York farmers are proud of the products we produce. Taste NY is a visible way to showcase the rich diversity of agriculture in this state and to encourage people to try food and beverages that originated on the farm.  The growth in Taste NY sales validates what we have long known, once people taste New York product, they will become repeat customers.”

Dr. Chris Watkins, Executive Director of Cornell Cooperative Extension, said, “The Cornell Cooperative Extension system is pleased to partner with the Governor’s Taste NY initiative, which promotes New York’s excellent products, many of which come from local farms.  Taste NY is an unparalleled opportunity for the Extension system to provide food safety, business and marketing expertise while offering local producers the ability to test, market and track product development. Taste NY has proven to be an economic driver for New York State, has allowed for improved communication about New York’s farms and provided healthier options for consumers during their travels and events.”

Corinna and Jason Geib, Owners of ImmuneSchein in Kingston, Ulster County, said, “Being part of the Taste NY store on the Taconic Parkway gave us the opportunity to offer our products to the many people that travel through the Hudson Valley.  Taste NY has grown to be one of our biggest customers in the first year, with a constant increase of order volume to date, and has been a great help with the success of our company.”

Eric Cole, Vice President of Java Joe’s Roasting Co. in Brooklyn, said, “Taste NY is a commonsense approach to highlighting and promoting New York’s finest food and beverage producers. This is a program that produces tangible results for small businesses like ours and consumers alike. Taste NY is also dedicated to showcasing the rich diversity of New York’s producers. The visibility this program has provided to Java Joe's Roasting Company has been tremendous!”

Keith Gibson, Owner of Grazin’ Angus Acres in Ghent, Columbia County, said, “Serving mid-state customers through the Taste NY Market at Todd Hill has allowed us to reach a whole new demographic. The program has allowed our business to bridge the gap between our Upstate farm and restaurant sales and our sales at farmers’ markets in New York City.”

Lorna Cline, Owner of Cline’s Catering in Binghamton said, “As a vendor of sandwiches and various food products, Taste NY has opened our eyes to a wide variety of exceptional New York State culinary delights. We are pleased to be part of this exciting and intriguing initiative.”

About Taste NY
Taste NY is an initiative launched by Governor Cuomo in 2013 to promote New York’s food and beverage industries. It is overseen by the Department of Agriculture and Markets and has created opportunities for local producers to showcase their goods at large public events, such as the Great New York State Fair and the Barclays Tournament at Bethpage State Park.

Over the last three years, the Taste NY initiative has seen steady growth and recognition. The program reported sales of $1.5 million in 2014 and tripled those figures to $4.5 million in 2015. Today, New York products sold under Taste NY branding are available in more than 60 locations throughout the State as well as the New York State Office of Trade and Tourism in San Juan, Puerto Rico.