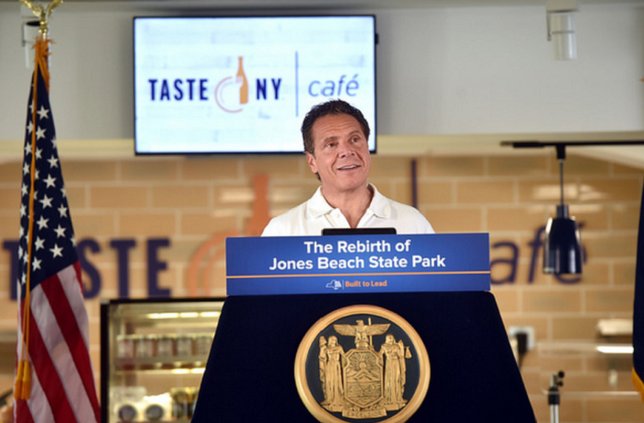 Improvements being made to West Bathhouse and East and Central Malls.

In addition to the improvement projects, the Governor also announced a new prototype mobile app to assist visitors with parking as well as the return of the annual Memorial Day weekend Bethpage Air Show at Jones Beach, Fourth of July Fireworks Spectacular and the I LOVE NY Tourism Pod.


"Today we are seeing the historic grandeur of Jones Beach as it was meant to be," Governor Cuomo said. "The rebirth of Jones Beach is helping to grow our tourism industry while bringing jobs to Long Island communities, and I encourage everyone to visit one of most beautiful and celebrated seasides in New York State."

The $36 million in improvements include:

Restoration of the West Bathhouse
The West Bathhouse, built in 1931, underwent a $16 million project to restore interior space and reestablish the open, airy connection between the pool and boardwalk that was part of the original design. The work included reopening the central bays in the West Bathhouse South Building in order to reconnect the water-to-water view and circulation from the pools to the beach. Concession spaces, including a new Taste NY Café, which will serve fresh, New York-made food and beverages, were reoriented to their historic north-south axis to allow easier access through the building and enliven the central core. New kitchens were installed to provide a wider array of menu options at the unique concession areas. It will be operated by the newly selected concessionaire, Centerplate.

The renovations to the West Bathhouse also include the addition of a new retail space and the historic vaulted ceiling that had been covered over by drop ceiling tiles was exposed. The interior improvements build on work completed last year to preserve and improve the Art Deco exterior of the bathhouse, including installing windows to match its original appearance, replacing the pool deck, and repairing the pool filtration system.

The final phase of the West Bathhouse project will be to restore and reactivate the stately second-floor Marine Dining Room and adjoining outdoor terraces to their original 1930s character, providing rentable space for catered weddings, reunions, proms and other events. The Marine Dining Room is expected to open for events by early spring 2017.

New York State Parks Commissioner Rose Harvey said, "It took a bold vision to build Jones Beach State Park, and Governor Cuomo is honoring that legacy with his far-reaching plan to revitalize the park for the 21st century. This parkwide transformation – including renewing the West Bathhouse and rebuilding on the long-vacant Jones Beach Restaurant site – will bring new vitality and visitors to one of New York’s most popular parks." 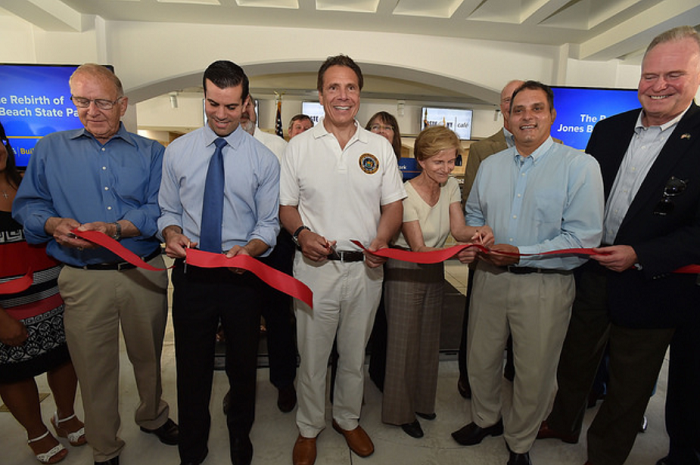 Taste NY Café and Taste NY Bar
The Café in the West Bathhouse will be one of the busiest Taste NY locations in the state, with more than 6 million people visiting Jones Beach each year. It will feature products from more than 30 different food and beverage producers located in nearly every region of New York, including Long Island. For a complete list of producers click here. 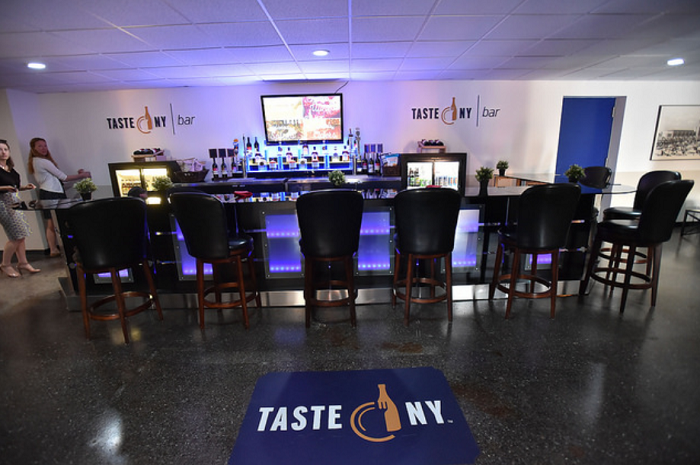 The Taste NY Café will give visitors the opportunity to enjoy everything from local seafood and hot sandwiches to bakery items and craft beverages. For visitors on the move, it will also offer grab-and-go options such as salads, chips, drinks, and more. The Taste NY Café is the latest addition to a growing number of Taste NY locations across the state. Taste NY products are featured at more than two dozen rest areas and travel plazas along the New York State Thruway, as well as at stores, cafés, and concession stands. Additional locations are expected to open later this year.

Additionally, Taste NY has partnered with State Parks and the premier live entertainment company, Live Nation, to promote the state’s growing craft beverage industry at Nikon at Jones Beach Theater which is operated by Live Nation. The partnership features the launch of a new Taste NY Bar, which will offer a rotation of New York wine, beer, spirits and cider selections to the approximately 350,000 annual visitors of the outdoor amphitheater. The Taste NY Bar will be operational for more than two dozen events this season. It will also offer New York snacks and food. For a list of participating producers click here.

New York State Department of Agriculture and Markets Commissioner Richard A. Ball said, "Taste NY producers offer some of the finest goods in the State and the addition of a Taste NY Café to the West Bathhouse is a great way to connect those companies to countless new buyers. Jones Beach is one of the most popular summer destinations in the state, so this is an incredible opportunity to promote the great work of our local food and beverage producers and to strengthen the success of the industry."

Improvements to the East and Central Malls
Construction will begin this year on a $14 million new green, climate resilient Jones Beach Marketplace on the East Mall. The market will offer fresh prepared foods, featuring Taste NY products and will be operated by Centerplate. The market building will also house a commissary for the preparation of food for the majority of Jones Beach food concessions, new bathrooms, and offices and retail for the new East Mall Adventure Course.

The 15,837 square foot building will be elevated over 2 feet above the base flood elevation which is required by FEMA to prevent the marketplace from being damaged in future storms. Major utilities will be located inside the elevated building or up on the roof and the building itself will be located further back from the original structure so that it is kept outside of the Coastal Erosion Hazard Area. Access to the building will be from elevated terraced boardwalks starting at the height of the existing boardwalk to the floor elevation of the new building.

The design of the new terraces will include hurricane straps to help the structure survive future storm surges. The windows and doors on the exterior will be constructed using impact resistant glass. The new marketplace building will restore the Beaux Arts symmetrical plan of the Central Mall, the gateway to Jones Beach. Since 2004, the East Mall site has remained vacant when building was demolished due to structural failure. Construction is expected to be complete for the 2018 season.

View renderings of the completed market building here and here.

Centerplate General Manager Rick Biglin said, "We are very excited to welcome visitors to Jones Beach State Park with new menu offerings and a breadth of great products from New York--including right here on Long Island. Centerplate has been proud to showcase delicious local products in partnership with TasteNY at the Javits Center, Saratoga Racetrack and Belmont Park, as well as Whiteface Mountain. The products available at Jones Beach will undoubtedly add local flavor from the Empire State's great suppliers and producers, and delight our guests with a uniquely New York summer experience."

Other improvements taking place this year include:

Additional efforts to improve the visitor experience at Jones Beach State Park include:

Prototype Jones Beach Parking Mobile App
New York State has developed a prototype for a parking app that will make it easier for people to find parking at Jones Beach. Visitors can go here on their smartphone and find parking availability for each lot updated in real-time. Additionally, the New York State Department of Transportation is working to display those parking updates on electronic signs on the Southern State Parkway and other highways leading to Jones Beach. Parking availability will also be available on Twitter.

Field 6 Concession Building
Last year, State Parks completed a $2.3 million renovation of the deteriorated bathroom and dining areas of the Field 6 Concession Building, which serves one of the most popular beach areas in the park. The improvements to 1948 structure allow for booths and tables to be placed in the concession area during the off-season, creating a diner-like experience for many patrons who visit year-round.

Bethpage Air Show at Jones Beach
Kicking off every Memorial Day Weekend, the Bethpage Air Show at Jones Beach attracts thousands of visitors to Long Island beaches to celebrate the beginning of summer, and shine a light on military families as well as honoring those who serve our country. This year’s show features the United States Navy Blue Angels, the F-35 Lightening II fighter, the Golden Knights U.S. Army parachute team, the Royal Canadian Air Force Snowbirds, and many other world-class military and civilian performers.

Bethpage Federal Credit Union CEO Wayne Grosse said, "We are proud of our 13 year partnership with New York State Parks to bring the world-class Bethpage FCU Airshow at Jones Beach. It has become a family tradition for 400,000 Long Islanders each Memorial Day weekend."

I LOVE NY Tourism Pod
The I Love NY Pod will once again be appearing at events throughout New York State offering a one-of-a-kind experience to learn more about New York State’s 11 vacation regions. This highly interactive mobile Pod includes a green screen where your picture can be imposed on visuals from around the state, pop quizzes about the state’s world-renowned destinations, and itineraries that can be personalized and e-mailed to you right from the Pod. I Love NY ambassadors are also available to help answer questions and find great places visit.

The I LOVE NY Tourism Pod will appear at the following locations:

Fourth of July Fireworks Spectacular
The July 4 Fireworks Spectacular, a Long Island patriotic tradition, will return to Jones Beach State Park this summer for the second year in a row. The 30-minute fireworks display, sponsored by Astoria Bank and performed by Garden State Fireworks, will begin at 9:30 p.m.

The Astoria Bank July 4 Fireworks Spectacular has traditionally drawn an average of more than 100,000 spectators in prior years, and is included in the regular price of park admission.

Astoria Bank CEO & President Monte Redman said, "We are thrilled to return this summer as the lead sponsor of the Astoria Bank July 4th Fireworks. This event is a wonderful way to celebrate Independence Day. Last year it was great to see thousands of local residents and visitors enjoying a day of family fun. We look forward to continuing the tradition of bringing the community together for one of the biggest and best fireworks displays our region has to offer."

The park improvements and events reflect Governor Cuomo's commitment to revitalizing the state park system and expanding access to outdoor recreation. The Governor's NY Parks 2020 program is a multi-year commitment to leverage $900 million in private and public funding for State Parks from 2011 to 2020. The Governor's 2016-17 Executive Budget allocates $90 million toward this initiative. In addition, this year the Governor announced the Connect Kids to Parks program, which provides free day-use park entry to fourth-grade students and their families, and creates a new transportation grant program to help students from underserved schools visit state parks and historic sites.

About Taste NY
Taste NY is an initiative launched by Governor Cuomo in 2013 to promote New York’s food and beverage industries. It is overseen by the Department of Agriculture and Markets and has created opportunities for local producers to showcase their goods at large public events, such as the Great New York State Fair. The program has also opened stores at Thruway rest stops along the state’s highways and in transportation hubs, enabling travelers to buy New York State’s homegrown and homemade products. Approximately 1,100 local companies have participated in these opportunities, further linking their products and the state’s growing food and beverage market to consumers from across the globe. For more information about Taste NY, please visit www.taste.ny.gov. Connect with Taste NY through Facebook, Twitter, Instagram and Pinterest.