Governor Cuomo announced that NYS is formally calling on the EPA to establish an official drinking water standard for the federally unregulated contaminant 1,4-dioxane. 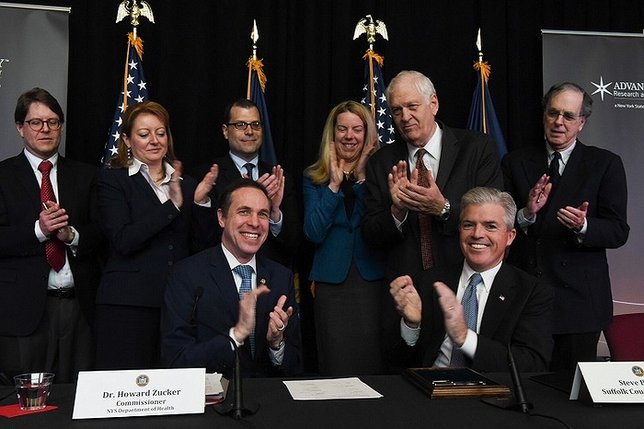 Albany, NY - February 11, 2017 - Governor Andrew M. Cuomo today announced that New York State is formally calling on the federal Environmental Protection Agency to establish an official drinking water standard for the federally unregulated contaminant 1,4-dioxane. Under the federal Safe Drinking Water Act, the EPA has primary authority to regulate drinking water quality. The Maximum Contaminant Level is the legal threshold set by the EPA limiting the amount of a given substance in public water systems.

Following a roundtable discussion on Long Island water quality organized by Governor Cuomo at Stony Brook University, the following individuals joined Governor Cuomo in signing a letter formally calling on the EPA to fulfill its obligation and set a MCL for 1,4-dioxane:

The letter also makes clear that this is a national issue, but if the federal government does not take action to regulate 1,4-dioxane, New York will move to set a state MCL:

"As new contaminants continue to emerge on a regular basis in communities across the nation, states should no longer be left to fend for themselves. The federal government should provide actionable guidance on best practices for removing 1,4-dioxane from drinking water, invest in cutting-edge treatment technologies, and set a MCL to protect public health.

"If the EPA fails to act in a timely manner, New York State will convene an advisory panel of experts to set an MCL at the state level. Make no mistake, this is a national issue that demands a consistent, national standard, but New York State is prepared to act in the absence of federal leadership. We are collectively urging the EPA to promulgate a regulation that sets a clear, enforceable MCL for 1,4-dioxane in order to equitably protect not just New Yorkers, but all Americans.”

To date, the EPA has not only failed to issue an MCL for this contaminant, but an existing federal loophole exempts public water systems serving less than 10,000 people from even testing for federally unregulated contaminants like 1,4-dioxane.

Despite the federal government’s inaction, New York State has stepped up under the leadership of Governor Cuomo to fill the void and ensure access to clean drinking water statewide.