Senator Ken LaValle called for an end to the Gap Elimination Adjustment (GEA) that has forced local school districts to cut educational programs and reduced services since it was implemented in 2010. 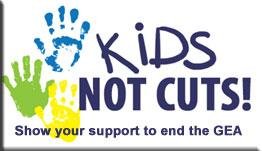 Long Island, NY - February 11, 2015 - Senator Ken LaValle called for an end to the Gap Elimination Adjustment (GEA) that has forced local school districts to cut educational programs and reduced services since it was implemented in 2010.  “Eliminating the GEA will restore much needed funds to our schools and assist in providing quality education to all of our children.” said Senator LaValle.  He continued, “The $1 billion in cuts should be fully returned to our schools in this budget year.”

Since 2011, Senator LaValle and the Senate Majority have successfully reduced the GEA’s impact by restoring some of the funding to public schools.  This year, the Senate Majority is making it a priority to fully eliminate the remaining $1 billion in anticipated GEA cuts from the budget.  The GEA has meant less funding for schools, fewer teachers in the classroom, students lumped in larger classes, and a bigger burden for local taxpayers. The Senate Majority seeks to abolish the GEA and its devastating impact upon schools and taxpayers starting with the 2015-16 state budget.

Senator LaValle and the Senate Majority have been leading the fight to abolish the GEA and deliver major funding increases to help mitigate its impact on education. The GEA cuts have been reduced by 62 percent – from a high of $2.6 billion in the 2011-2012 budget to $1 billion in the 2014-15 budget – to help restore billions of dollars in state aid to schools.

Last year alone, the Senate Majority successfully negotiated an additional $602 million – 86 percent more than the Governor proposed and nearly seven times more than what the Assembly proposed – to help schools overcome the challenges the GEA created. That funding represented a major step towards lessening the GEA’s burden on school budgets, but there is still more than $1 billion in GEA budget cuts anticipated for the upcoming fiscal year.

The Governor’s Executive Budget proposes an overall $1.1 billion increase in education funding over last year. However, that increase was not specifically tied to the elimination of the $1 billion needed for this year’s GEA.

The Senate Majority is currently preparing its budget proposal, which will include revenue estimates for the next fiscal year and sources of funding. The conference will be proposing a budget that uses the majority of the $1.1 billion increase proposed in the Executive budget – up to $600 million – and is working to identify the sources for the additional $300-$400 million needed this fiscal year to eliminate the GEA once and for all.