Is winter waning? According to the latest National Weather Service report, it just might be. 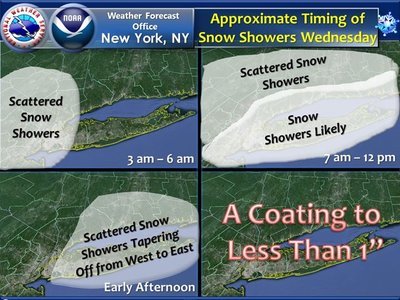 Is winter waning? According to the National Weather Service’s latest report, it just might be. But with the beating we took from winter storm Pax and snowfall totals like we’ve had, why would we expect the white stuff to give up without a fight?

According to the NWS, scattered flurries are expected before 3 p. m. today with partly sunny skies and a high near 32 degrees. Then, a slight chance of snow showers is expected after 3 a.m. with partly cloudy skies and a low around 20 degrees.

Wednesday morning will likely bring more snow showers. They will begin developing before daybreak and move west to east across the area through the morning hours. Skies will be mostly cloudy with a high near 30. Winds will be out of the southwest at 7 to 16 miles per hour, with gusts as high as 28 miles per hour.

The highest likelihood for snow showers is across Long Island, New York City, metro Northeast New Jersey, and coastal Connecticut, but significant accumulations are not expected, with a coating to under an inch forecast.

Drivers are warned, however, to watch for some slick conditions, especially during the morning commute where snow showers do occur. The snow showers will end late morning to early afternoon.

Wednesday night will bring lows around 13 degrees under partly cloudy skies. Winds will be at 5 to 9 miles per hour, becoming calm after midnight.

With no snow in the forecast for Thursday, we can expect to return to mostly sunny skies with a high near 34 degrees. Winds will be out of the southwest at 6 to 11 miles per hour, increasing to 19 to 24 mph in the afternoon. Thursday night will be partly cloudy, breezy and cold, with a low around 12 degrees.

Friday will again bring mostly sunny skies with a high near 27 degrees.