A police officer paid a pair of Garden City residents a visit to enforce on unusual law prohibiting the washing of cars in public places. 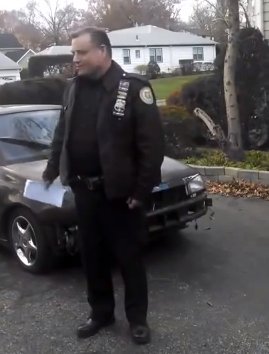 A video taken in Garden City has been spreading around various social media websites over the past few days. The footage, evidently taken via cell phone, depicts a police officer (pictured right) accosting a pair of young men for washing a car in their own driveway.

The two men who took the video appeared dumbfounded when the officer told them that there was a village ordinance against washing cars in public places, but the officer came prepared with a printed copy of the unusual law, saying “I’m not making this… up” when presenting it to the car owners.

In addition to prohibiting the cleaning of a variety of fabrics in public spaces, Section 178-3 under Article II of the Garden City village ordinances states that “no person shall wash or cause to be washed any motor vehicle or like conveyance upon any public street, highway or public place.”

After a brief argument the officer left without incident, letting the men off with a warning. It is unclear whether the pair was actually in violation of the cited law; as one of them pointed out, his driveway is not a public street, highway, or place, but the officer told him that it is in public view and thus subject to the same ordinance.

The officer seemed aware of how far out of the ordinary the local law lies—when initially asked by one of the youths whether there was a problem, he responded with “Yeah… the problem being your neighbor doesn’t like you,” citing an angry neighbor as the cause for his visit rather than a need to prevent town residents from washing their cars.