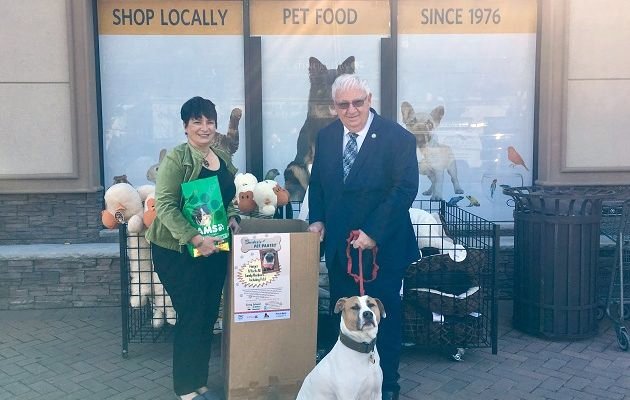 Long Island, NY - January 31, 2018 - New York State Senator John Brooks today announced he is hosting a Pet Food Drive in partnership with Baxter’s Pet Pantry, operated by Long Island Cares, Inc. Long Island Cares started Baxter’s Pet Pantry in 2009, and has since distributed over one million pounds of pet food to pets in need.
Senator Brooks is asking residents of the 8th Senate District to participate by donating online from February 1, 2018 through April 30, 2018, or, by dropping donations into designated boxes at stores: Mutts & Butts, 2076 Merrick Road, Merrick; Petco Animal Supplies, 5500 Sunrise Highway, Massapequa; and Petco Animal Supplies, 806 Sunrise Highway, Baldwin. The participating stores will be accepting donated items during business hours until April 30th.
Senator Brooks’ pet food drive goes far beyond feeding hungry animals. The donations allow financially struggling families to keep their beloved pets at home with them rather than lose them to a shelter because the family cannot afford to feed the animals they consider as little family members. Keeping pets with their families greatly reduces the amount of dogs and cats who would otherwise be surrendered to local shelters. Not only does this help animals and the families that love them, but also reduces taxpayer costs of funding overcrowded government shelters.
Donors may simply buy pet food online to be donated, here: Click to SHOP NOW: https://yougivegoods.com/senatorbrookspetfooddrive to purchase the pet food you would like to donate online from February 1, 2018 through April 30, 2018. Donors will be emailed a tax receipt at the time of purchase. At the end of the drive all goods ordered online will be shipped directly for distribution to pet owners in need. Online prices include shipping, handling and tax.
Senator Brooks said, “I am happy to partner with Long Island Cares on this pet food drive which not only benefits pets in need, but also the families who need this extra help to take care of their beloved pets. These donations become the difference between a beloved pet staying with its family and being removed to an animal shelter.”
Residents with questions may contact Senator Brooks’ District Office at (516) 882-0630.
Senator John E. Brooks represents portions of Nassau and Suffolk Counties.