Hunger-relief advocates, legislators and farming community urge Governor Cuomo and the legislature to work together in providing appropriations in the upcoming state budget for funding farm-to-food-bank legislation. 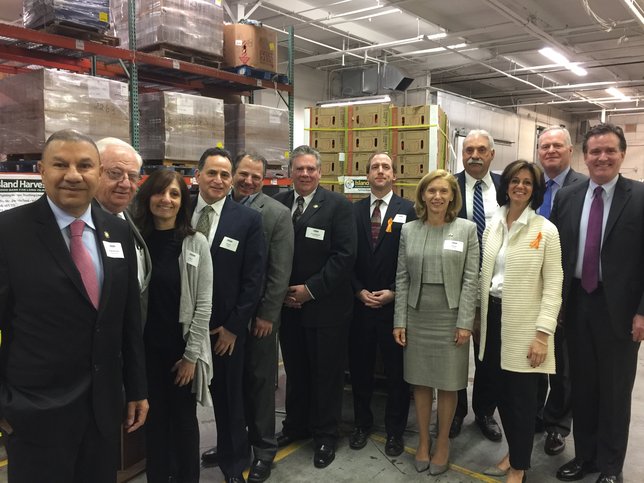 “In 2016, New York’s farmers generously donated more than 12 million pounds of food to help address the critical issue of hunger and food insecurity, including two million pounds donated by Long Island’s farmers,” said Randi Shubin Dresner, president, and CEO, Island Harvest Food Bank. Shubin Dresner, who is also chair of the advocacy committee of the NY Food Bank Association. “For their generosity, farmers are often breaking even, or losing on labor, packaging, transportation, and other costs.”  Since establishing a partnership in 2008 between Island Harvest Food Bank and Long Island’s farmers, approximately 11 million pounds of fruits and vegetables have been donated to help feed Long Island families struggling with hunger. The alliance is among the largest farm-to-food-bank programs in New York State.

“New York farmers who help our food banks by providing assistance to struggling families should be commended for their philanthropy and the state should work with them in their efforts.  The costs of donating this food can be substantial to small farmers and the state must make every effort to protect these hard-working men and women from bearing an unfair burden.  That is why the farm-to-food tax credit will be in our one-house budget proposal and we will work with our Assembly colleagues and Governor Cuomo to ensure it becomes a reality this year,” stated Senator Flanagan.

Farm-to-food-bank initiatives greatly benefit New York’s hunger-relief organizations and the people they serve, providing them with healthy, nutritious fruits and vegetables.  Food insecurity, and the lack of access to healthy, nutritious food, has been cited as a leading cause of diabetes, hypertension, obesity and other chronic health problems among low-income individuals.

The American Heart Association, the National Institutes of Health, and Feeding America, a leading, national anti-hunger organization, have determined that there is a definitive link between health and hunger.  According to Feeding America’s Hunger in America 2014 study, 21 percent of Long Island households served by local food banks reported at least one member with diabetes, and 50 percent stated having a member with high blood pressure.

Shubin Dresner says, “Farm-to-food-bank initiatives are a means of getting more healthy fruits and vegetables to food insecure people whose health often suffers due to the lack of a balanced diet. The bill is truly a win-win since it encourages growers to donate more nutritious food to those who need it most.”

“Governor Cuomo has long been a champion of the approximately 2.7 million New Yorkers in the unenviable position of knowing hunger firsthand. We’re confident he will work with the legislature in adopting a proposal in the budget that benefits the farmers, the state, and most importantly, those who ultimately gain from the farmers’ generosity,” concluded Shubin Dresner.