From Alaska to Florida, and from Maine to Hawaii, on Saturday, May 9, U.S. Postal Service letter carriers across the country will visit homes and businesses in every city, suburb and town in America to ... 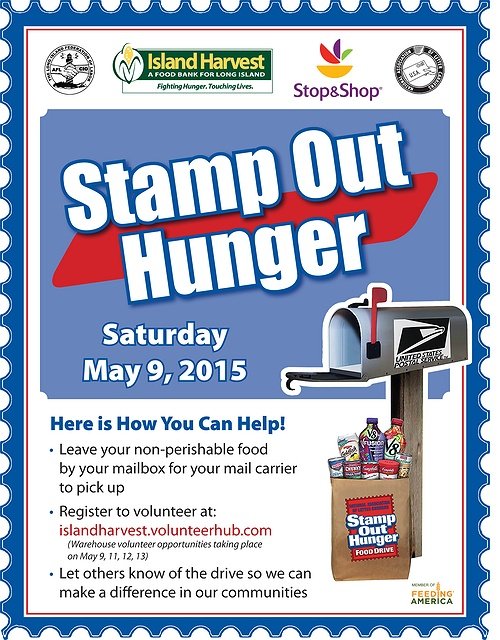 Hauppauge, NY - April 30, 2015 - From Alaska to Florida, and from Maine to Hawaii, on Saturday, May 9, U.S. Postal Service letter carriers across the country will visit homes and businesses in every city, suburb and town in America to collect food for what is the nation’s largest food drive.

“This is it.  The day to make a difference.  If ever you’ve thought about helping your community, the time is now. Be a part of something big,” asserts Randi Shubin Dresner, President & CEO, Island Harvest.

Island Harvest, Long Island’s largest hunger relief organization, feeding and supporting 316,000 Long Islanders annually, is proud to announce that it has been chosen by the National Association of Letter Carriers and the U.S. Postal Service to be the Long Island region’s sole recipient of its “Stamp Out Hunger” Food Drive taking place on Long Island, and nationally, on Saturday May 9.

Here’s how it works.  Long Islanders are being asked to set out non-perishable food by their mailboxes on May 9, which will then be picked up by their letter carriers while delivering the day’s mail.  The letter carriers will then deliver their collected food to an Island Harvest “Stamp Out Hunger” warehouse – where an army of volunteers will sort food, to be distributed immediately to Island Harvest’s network of 570 member agencies, including food pantries and soup kitchens throughout Long Island.

“While the letter carriers do all of the day’s heavy lifting, Stamp Out Hunger makes donating easy.  All people have to do is leave their donation by their mailbox,” asserts Randi Shubin Dresner, President  & CEO, Island Harvest.  “Our goal is for every family to donate something, and let their letter carriers do the rest. It’s that simple.”

“The harsh winter weather this year presented Long Islanders experiencing hunger with many challenges, including pay loss due to the weather, making it an even more difficult time to put food on the table,” explained Dresner.  “This, coupled with the usual springtime need for food following the depletion of our holiday donations, makes this year’s Stamp Out Hunger food drive essential.”

Since the inception of Stamp Out Hunger in 1992, over 1.3 billion pounds of food have been collected by letter carriers in the United States.  Locally, last year Long Islanders donated more than 326,000 pounds of food and this year, Island Harvest expects a similar amount to be collected by letter carriers on 2,219 carrier routes across Long Island.

“The most trusted federal employees, U.S. Postal Service letter carriers are routinely involved in many community outreach initiatives, and often, form very close relationships with their customers,” said Walter Barton, President, NALC.  “It is this connection they have within their communities that compels them to want to help make a difference.”  Stamp Out Hunger is the nation’s largest food drive that has been taking place now for 23 years.

“Stop and Shop is pleased to be a Grand Sponsor of Stamp Out Hunger and support this important initiative, along with the National Association of Letter Carriers and the United States Postal Service to benefit Island Harvest Food Bank. We look forward to a very successful event, raising over 300,000 lbs. of food to support the Long Island community” says Arlene Putterman, Manager of Public and Community Relations, Stop and Shop.

“We couldn’t be more pleased to be working with the NALC and Island Harvest to help make a difference on Long Island,” said Lorraine Castellano, District Manager, Long Island, U.S. Postal Service.   “This year, we have 2,219 carrier routes that will be participating in the Stamp Out Hunger Food Drive to benefit Island Harvest, an effort that will certainly touch many lives.”

Since 1992, Island Harvest has grown to become the largest hunger relief organization in the region, feeding and supporting 316,000 Long Islanders annually, helping to change the lives of millions.  By relying on volunteers, in-kind services, and donated food, more than .95 cents of every dollar donated to Island Harvest directly benefits Island Harvest’s robust programs and initiatives.