Suffolk County issued a report on the status of water quality for the first time in nearly 30 years. 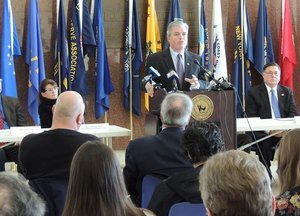 Suffolk County Executive Steve Bellone announced on Thursday that recent studies revealed potentially dangerous levels of pollution in Long Island’s ground and surface waters. According to the Executive Summary of Suffolk County’s Comprehensive Water Resources Management Plan, which was recently updated for the first time since 1987, the primary source of contamination is excessive levels of nitrogen which is leaking into the water supply from faltering septic tanks and cesspools as well as through the use of pesticides.

The high quantities of nitrogen are believed to be negatively impacting drinking water, beaches, and wetlands. Wetlands serve as Long Island’s natural defense against surges and storms like Sandy, but as they erode the Island becomes more vulnerable to major disasters. Nitrogen in the sound is believed to be fueling the recurring red and brown tides which choke local marine life and have crippled the region’s shellfish industry.

“Water is at the heart of everything on Long Island,” Bellone said during a press conference. “It is critical to our health and our quality of life and it underpins our multi-billion dollar tourism industry… we have been polluting this precious resource in a way that has devastated our surface waters… caused negative trends in the quality of our drinking water and left us more vulnerable to future storms, like Sandy.”

Only about 30% of Suffolk County runs through a sewer system, making for a vast and difficult to regulate series of disconnected cesspools in place to continuously pollute the county’s waters. James Gaughranm, chairman of the Suffolk County Water Authority, warned that if efforts are not made to reverse the flow of pollution into the Island’s water and fix degrading aquifers, residents could expect their relatively modest water bills to spike and “become astronomical in the future.”

“The report issued today highlights the reality that we are at a critical moment in the health of our water resources and for the continued viability of Long Island as a region,” said Legislator Kara Hahn.  “We won’t allow aging septic tanks and rising sea levels to destroy our way of life. We must act now with utmost urgency to address the critical issue necessary to sustain Suffolk’s water.”

“The number one job of government is taking care of public health,” added Dick Amper, a member of the Long Island Pine Barrens Society. “The first step to solving any problem is acknowledging the problem. We are going to need sewage upgrades, look at how we use pesticides. It's a job that can be done because it must be done.”

Bellone said that improving water quality is now the most important priority of his administration, and that he would work with the scientific, environmental, and business community to find and fund solutions for the pollution problem.