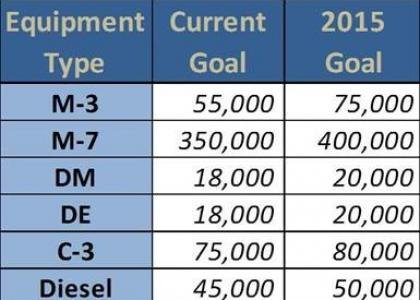 For the first time, the Railroad has established specific on-time performance (OTP) goals for each of its 11 branches, a strategy that seeks to improve service on each branch while recognizing that operationally no two branches are the same. The LIRR is also raising the bar for Mean Distance Between Failures (MDBF), a key measure of fleet reliability that tracks how long a railcar or locomotive travels before a breakdown causing a delay, a measure that has improved significantly over the last decade to a point where the LIRR beats its goals by wide margins.

"Setting realistic performance goals that are branch specific gives us a good shot at boosting OTP system wide," Nowakowski said. "As for fleet reliability, the consistency in which we have been beating our own goals means it's time to reach further, to raise our expectations for MBDF if we are going achieve further improvements in that category.”

Nowakowski, a veteran railroad professional who has been president of the LIRR since June 2014, unveils the changes at a time when the LIRR is seeing ridership rise to the highest level in years. The LIRR carried 85.9 million people in 2014, an increase of 3% over the prior year and the most since the onset of the Great Recession in 2008.

"Our region has clawed its way back economically, which means that more Long Islanders are relying on us to get them to work and back home safely," said Nowakowski. "These two new initiatives represent achievable goals and will help us meet customer expectations by improving service across the board.

On-Time Performance
Historically, he LIRR has maintained a single, system wide, on-time performance goal of 95.1%, for each branch, though only two of the Railroad’s branches - the Hempstead Branch and the Far Rockaway Branch - consistently meet the target. Nowakowski believes insisting on the exact same level of performance from every branch is not achieveable given that operationally, no two branches are alike.

“On some branches trains travel longer distances,” he said. “Some have higher ridership and so heavier loading and unloading or more stations to serve or railroad crossings to contend with. And then there are the physical characteristics of the Railroad's right of way. Some branches face geographic impediments that are not going to go away."

Nowakowski asked his team to chart the highs and lows of each branch's OTP going back three years and then set realistic, individual "stretch" goals for improving OTP in 2015 based on historic performance

As shown in the chart, the Babylon Branch, the LIRR's busiest branch had a 3-year average OTP of 92.7%, falling short of the 95.1% goal. Nowakowski’s goal for 2015 is to improve that by 1.2% for an OTP of 93.9%. That would represent 2.5% increase over the 2014 performance. Trains on the Montauk, Ronkonkoma, Huntington and Port Jefferson branches historically have the lowest OTP because they are the branches with the most operational challenges. Among them, only Ronkonkoma trains achieved a 90% OTP last year when all were below their three year average. For 2015, the LIRR has set new goals for each branch that go beyond their three-year averages as well as a new system wide OTP goal of 94%, which is 2% higher than the overall 2014 performance. "It makes no sense to set one goal for all branches when you know all branches are not the same,” said Nowakowski.” And it makes no sense to set goals that you know are unreachable. The new goals are still a stretch and achieving them would be quite an accomplishment. It represents a challenging target for our employees and it gives our customers a realistic sense of what they can expect.”

Mean Distance Between Failures
Over the last five years, the Railroad has consistently exceeded its goals for MDBF or the average number of miles a railcar or locomotive travels before breaking down and causing a delay. The higher the MDBF, the more reliable the equipment and the service. The LIRR operates two types of electric trains, the M-3 and the M-7, dual mode diesel/electric trains and diesel powered trains in a fleet that totals 1,165 railcars and locomotives. The older M-3 electric fleet, which has a MDBF goal of 55,000 miles, on average makes 97,000 miles before breaking down. The newer M-7s MDBF of 485,000 far exceeds the goal of 355,000 miles. But once again the Railroad is raising the bar by raisingthe MDBF goal its rolling stock.

Nowakowski commented: “We are very encouraged by this performance, which indicates a sustained rebound of the NYC job market in key sectors, more leisure travel on the LIRR and a positive response from customers as we restored and enhanced service.”