DA Investigators found eight pit bulls who were underweight, suffered from bite wounds, and were kept in deplorable conditions at the home of Hector Hernandez. 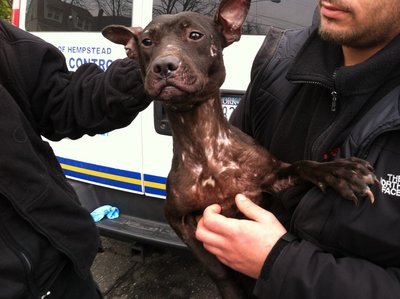 Of the eight pit bulls, most of the dogs living in the makeshift structure in a multi-room shed had bite wounds or scarring from previous wounds. Also in the shed were numerous chickens and a rabbit that were also being kept in deplorable conditions.

To dogs names Roja and Nana were found with fresh bite wounds on their sides.  Investigators reported that they were “sickly, underweight with bones visible, with overgrown nails and open wounds.”  The other six dogs – Little Red, Brownie, Sassy, Scorpio, Honey, and Thor – were all living in poor living conditions on Hernandez’s property.

DA investigators also found heavy restraint chains on the premises, as well as a treadmill that had been modified with a wooden frame and dog tether.  Vitamins and supplements were found near the dogs’ cages, and a “training stick” used for training dogs to fight was found nearby with a stuffed animal attachment.

“There will be serious consequences for those who show the utmost disregard for the animals under their care,” DA Rice said in a press release. “My office will continue to work closely with advocates and local authorities to ensure that animals are protected, and that the people who mistreat, abuse and exploit them are brought to justice.”

If convicted as charged, Hernandez could face up to one year in jail, and will have to pay fines of $15,000 per dog.