Two Nassau churches were robbed within one week of each other. 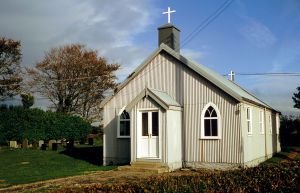 A Bay Shore man was arrested at his home late on the night of Thursday, January 16. Peter J. Vignona, age 53, was a plumber working for Traditional AC Plumbing, which had been hired to work on the boiler of St. Pius Church in Uniondale.

Vignona went to the church on January 8, where he is accused of having stolen scrap metal and a solid brass tabernacle. He was arrested without incident, and now faces charges of Grand Larceny in the Third and Fourth Degree; the tabernacle has not been returned. He will be arraigned on Friday, January 17 in Hempstead.

This incident comes just days after Mount Olive Baptist in Manhasset was broken into. A robber forced his way into the church between the evening of January 10 and morning of January 12, where he is said to have ransacked the pastor’s office and stolen the church check book.

The Manhasset burglary remains unsolved, and police are asking anyone with information to call Crime Stoppers at 1-800-244-TIPS.