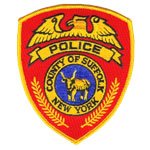 Shirley, NY - September 2, 2013 - Suffolk County Highway Patrol officers conducted a sobriety checkpoint along with Suffolk County Parks Police on William Floyd Parkway at Smith Point County Park. This operation was conducted for the prevention of injuries and fatalities associated with driving while intoxicated, particularly during the Labor Day weekend. A total of 571 vehicles went through the checkpoint.

The following person was charged with Driving While Ability Impaired by Alcohol:

Additionally, two vehicles were seized as a result of these arrests.

The above individuals will be arraigned later today at First District Court in Central Islip.