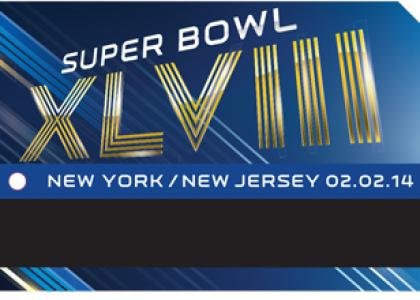 The series of commemorative MetroCards consists of four cards, each with a unique front and all share the same messaging on the back which simply states, “Together, the National Football League and the New York/New Jersey Super Bowl Host Committee are bringing the greatest game to the greatest region.”

Random distribution of the cards began in MetroCard Vending machines (MVMs) and booths on January 6 and will conclude on February 3.  A total of one million cards were printed, 250,000 of each version. The MetroCards were designed and purchased by the Super Bowl Host Committee.

“There’s no better region to host the Super Bowl and no better way to celebrate and promote that fact than by saying it on a MetroCard,” said Paul J. Fleuranges, MTA's Senior Director of Corporate and Internal Communications. “The front of our MetroCards has really become a game-changer as a new, innovative medium to advertise.”

Advertisements have appeared on the rear face of MetroCards since 1995; but in July 2012, the MTA announced that it would begin selling commercial advertising space on MetroCards rather than hiring an intermediary, and that it would offer space on the fronts of MetroCards for the first time.  Including the Super Bowl MetroCards, there have been 10 MetroCard ad campaigns since the MTA started the program and a total of 5,825,000 cards have been printed with ads on the front.

This advertising effort is the latest in a series of initiatives undertaken by the MTA to ensure it is receiving the maximum value it can from selling advertising space. Other efforts include expanding advertising to the exteriors of trains, full interior and exterior subway train advertising wraps, digital advertisements inside the subway system, digital moving images on subway station sidewalk entrances, and more.

The MTA does not disclose the amounts paid for specific ad campaigns. Advertisers can put their ads on the backs of MetroCards for 18¢ to 51¢ per card, depending on the quantity of cards purchased. That works out to $25,500 to $450,000. Advertisers can also use the front and back of cards with minimum print runs of 250,000 cards and associated rates ranging between 25¢ and 45¢ per card.

Customers should note that at MVMs, cards are added to an existing supply of standard MetroCards, so there is no guarantee that purchasing a fare will result in the acquisition of a card featuring a particular design or advertisement.

The MTA produces 4 to 5 million MetroCards every month.