Fireworks by Grucci of Bellport broke the Guinness World Record for Largest Fireworks Display to ring in the new year. 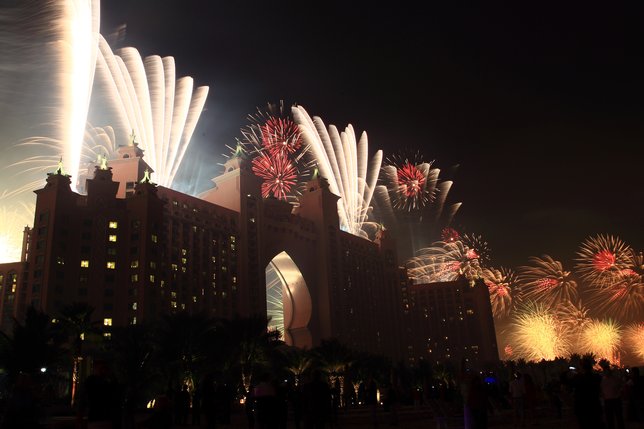 Established in 1850, Bellport-based Fireworks by Grucci has been in the pyrotechnics business for a long time. Through six generations this family-owned and operated Long Island company has dedicated itself to creating new and innovative spectacles of light and has received a wide variety of recognition and accolades in its time. Having crafted shows for numerous presidential inaugurations, centennial celebrations, and Olympic Games, Grucci began 2014 with its sights set as high as its fireworks.

To ring in the New Year, Fireworks by Grucci returned to Dubai, where it had previously run a stunning show in 2008, with the intent to break the world record for the Largest Firework Display in history. Alistair Richards, president of Guinness World Records, was on hand to witness and verify the attempt.

“When I was asked by my good friend Jerry Inzerillo, the Executive Producer of the event, to create something to be bigger and more creative than 2008, I thought in addition to an encore presentation from the Palm Jumieirah the addition of The World Record would certainly add to the drama,” Phil Grucci, CEO of Fireworks by Grucci, said in an interview with LongIsland.com. “Then once I created the initial design it was evident the show would grow way beyond the current World Record. At that time I proposed we present a World Record attempt.”

“The initial request was for a phenomenal show that would be larger and more spectacular than the 2008 Palm Jumeirah and Atlantis Grand Opening,” he added. Palm Jumeirah is an artificial archipelago built by Dubai; Atlantis is a resort which opened on the Palm in 2008.

Over the length of nearly 62 miles on the Palm’s shoreline, a long series of unique and colorful displays lit up the New Year’s Eve night sky as a record-breaking 400,000 fireworks were launched in succession to an original musical score. It took a team of 200 technicians from the Bellport headquarters to run the show, and even more time and effort to plan and prepare it.

“We have been working 10 months on the project,” said Grucci. “I spent over 2 months on the design, the engineering and fabrication of the specialty equipment was 4 months, the manufacturing of all the products was 2 months and the installation on location 2 months.”

Phil Grucci has been a partner in his family’s company for over 25 years and sole-owner since December 2012. “I always had the aspiration to become part of our family business,” he said. “I wanted to contribute to the future of our company.”