Come watch Long Island Zombies once again join the world in an attempt to break the world record for the largest simultaneous performance of Michael Jackson’s Thriller dance! 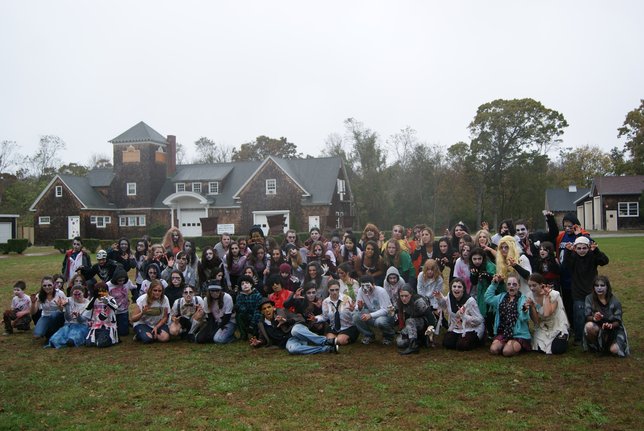 Islip, NY - September 24th, 2013 - Long Island Zombies are once again preparing to join the ranks of thousands of fellow zombies around the world in an attempt to break the world record for the largest simultaneous performance of Michael Jackson’s Thriller dance. The local event is scheduled for Saturday, October 26th, 2013 from 4PM to 6PM, with the official dance taking place at 5PM local time and will be one of the many synchronized worldwide charitable events. “Thrill the World @ Islip 2013” will take place at Town Hall West, 401 Main Street in Islip. The parking will open at 3:30 p.m. Once again, this event is being sponsored by the South Shore Community Organization, part of the Town of Islip’s network of community Youth Agencies, as well as the Town of Islip Youth Bureau. As in the past, this event unites the community through music and dance to raise funds for various charities.

“Thrill the World @ Islip” is seeking youth and adults to participate in this fun, exciting and charitable event. The “Thriller” routine is VERY easily learned using a simple system that requires absolutely no dance experience. If you think you have two left feet - don't worry. All you need to do is learn a few simple words to prompt the steps and you’ll learn the dance in no time. Entire families and groups are welcome!

An Informational Meeting will be held on Friday, September 27, 2013, from 5:00 PM to 6:30 PM at the Joyce Fitzpatrick Senior Center, located on Irish lane in East Islip. If you are unable to attend this meeting, feel free to attend the First Lesson/Rehearsal on Saturday September 28, 2013, 2:00 PM to 5:00 PM (location to be announced on Website). Full rehearsal schedules as well as the online registration are available on the event’s website. Online registration for participants is open until Friday, October 11, 2013.

The public is invited to attend the performance, bring non-perishable food to donate and/or monetary donations, and enjoy a thrilling performance! T-Shirts commemorating this 2013 event will be available for purchase at $13 each, any size. There will also be a special performance by the Long Island Flash Mob Organization (LIFMO) following the Thrill the World event.

To date, “Thrill the World @ Islip” has collected and donated over $6,000 and 1,000lbs of non-perishable foods to charities across the country, including St. Jude’s Children’s Research Hospital, the Juvenile Diabetes Research Foundation, the American Red Cross, and more locally, Island Harvest, Long Island’s largest food pantry network. This event, created in 2010 by Islip High School Senior Bryan Ramirez has been a major contributor to the worldwide Thrill The World event.

For more information about the "Thrill the World @ Islip" event, to view photos and videos of past events and to register as a dancer or volunteer, visit their website. You can also contact Bryan Ramirez directly by emailing him.