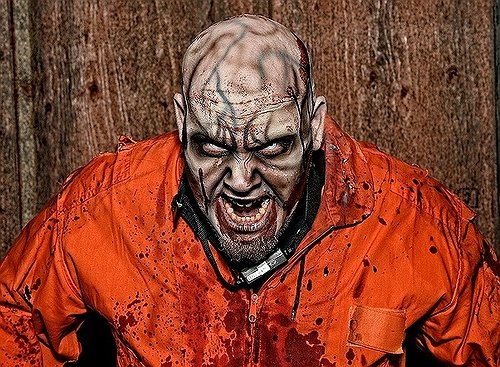 NYZ Apocalypse is a fair bit different from your average haunted house. To be sure there are plenty of ghostly elements to be found inside—from the low lights and dingy atmosphere to the disheveled underground prison system and hordes of undead inmates, the attraction is filled with components perfect for any Halloween attraction—but there is more to NYZ beyond the unsettling décor and zombies popping out to give their victims a good scare.

In a traditional haunted house, guests are left more or less defenseless as an array of ghosts, ghouls, and other creepy characters pop out to shock and scare them. NYZ Apocalypse, however, allows participants the rare opportunity to turn the table and fight back! Armed with a full-weight laser rifle and just enough ammunition to survive from one checkpoint to the next, those who enter the Apollo Prison System are able to fire back at the zombies lurking behind every corner and, with a bit of luck and skill, escape to the other side of the prison alive.

The result then is less a haunted house and more an interactive zombie outbreak experience made of equal parts Halloween haunt, laser tag, and First Person Shooter. In providing an event perfect for Halloween enthusiasts, Horror buffs, paintball/airsoft players, laser tag lovers, and FPS players alike, it’s no small wonder that NYZ draws a large crowd not just during October, but every weekend throughout the whole year.

Upon arrival, guests are greeted by a group of “survivors” who have just made their way out of the infected prison. Before even making it through the front door, they are given an intense account of the story behind the Apollo Prison System and the cause of the sudden outbreak; if all agree to help “fight the infection,” the group is led through to upper level of the prison where further instructions are given and every individual is equipped for battle.

Once fully prepared, the team enters the infected area of the prison with an additional armed guard, and is quickly under pressure from the zombies waiting below. Headshots are the only effective way to slow the waking dead, but even the best shot will not stop them outright; the team must keep pressing on and fight through one group of zombies after the next.

Along the way several benevolent guards and soldiers will help the team reload its guns, but for the most part the group will be on its own as it tries to claw its way back to the surface. There is rarely a reprieve from the undead onslaught, which creates a constant sense of tension and keeps players on their toes the entire time.

If everyone makes it out alive, each member will be able to turn in his or her gun and check to see who had the best score while in the underground prison. The number of zombie kills, level of accuracy and times each member was bitten down below is displayed on a screen just before the exit; though if anyone is bitten too many times he may find it difficult to leave.

From beginning to end, the NYZ experience is fully immersive. Every zombie, solider, doctor, and worker there remains in character throughout the night, and each cellblock is staged and decorated to make participants feel as though they have really entered a decaying prison. Set designs, makeup, costumes, and the guns themselves are all top notch, allowing all who go to be fully engrossed in zombie hunt. Several staff members will remind visitors that “this is not a game,” and the whole cast does a superb job of treating NYZ as a “real” zombie outbreak.

Would you like to find out more about this haunt and other haunted attractions around Long Island? Then check out our 2014 Haunted House Reviews!