School Supplies on Shelves in July?

Isn’t it a little too early for school supplies to be out on store shelves? 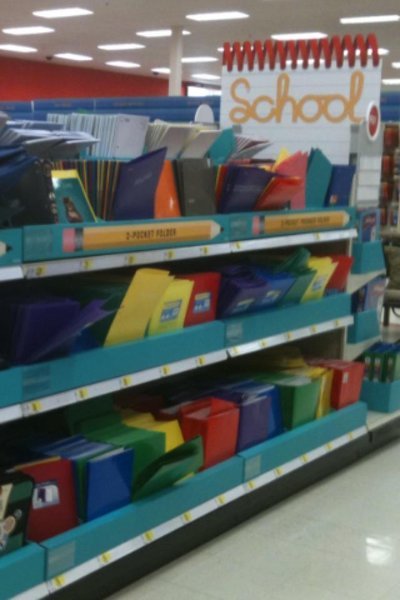 On a recent trip to a major retail store, my children were horrified at the aisles of school supplies.  I overheard the words "child abuse" uttered between my kids.  I don't know if I'd go that far. But it was the weekend of July 4th and we were just starting to get into our summer camp routine. Most kids are choosing to keep their minds as far from the classroom as possible.

I asked an employee who was stocking the displays if this was earlier than usual.  He said, "Most of the summer merchandise was sold early and made room for the new stock."  Retailers are already gearing up for the first school bells to ring in September!

Even with the shelves full of pencils and glue, I refuse to start shopping.  I will not wait until the last minute to shop for my kids' school supplies but I am not buying them today either. It's just too depressing to start shopping now. When I see those ads for back-to-school supplies, I don’t get that “it’s the most wonderful time of the year” feeling. I just feel bummed out. And now that I’ve started seeing those ads earlier and earlier, I just feel irritated. Stop trying to steal my summer, retailers!

According to the National Retail Foundation, back-to-school shopping season has fallen earlier this year than ever before as competition between retailers increases amid shrinking consumer budgets.

"In seven and a half years, I've never once seen so much emphasis put on back-to-school before July 4," said National Retail Federation spokeswoman Kathy Grannis. "It is one of the most competitive times of year for big retailers. They know consumers are on budgets, and they're vying for those dollars."  Back-to-school accounts for $84 billion in sales annually according to Ad Age, making it the second-largest spending season after Christmas, which itself appears to arrive earlier and earlier each year...

With back-to-school starting before the Fourth of July, that can only mean that if you don’t buy your Halloween costumes by August, they’ll all be gone. Before school even starts, the stores will start selling Christmas trees. Can we please slow down? We’re just barely getting good corn on the cob; it is not time to think about school supplies.

For early birds, now is the perfect time to get started. I will make my way to the stores with the school supply lists in a few weeks.  The first day of school isn't until September 9th.

What is your opinion of retail rushing us through life?