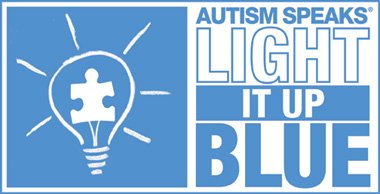 April is Autism Awareness Month.  The numbers are staggering.  More than 3 million Americans currently live with an autism spectrum disorder.  An estimated 1 in 88 children (1 in 54 boys) in our country is on the spectrum.  This number has increased by 78% over the past six years, due to the improved diagnosis.

The United Nations General Assembly adopted a resolution which declares April 2nd as World Autism Awareness Day.  This is one of only four official health-specific United Nations Days and will bring the world's attention to autism, a pervasive disorder that affects tens of millions. The World Autism Awareness Day resolution encourages all Member States to take measures to raise awareness about autism throughout society and to encourage early diagnosis and early intervention. It further expresses deep concern at the prevalence and high rate of autism in children in all regions of the world and the consequent developmental challenges.  Light It Up Blue to shine a light on autism events are taking place.

In addition to fundraising and awareness events all over the world, the co-founders of Autism Speaks  will ring the opening bell on Wall Street this morning. Yoko Ono will flip a switch and illuminate the Empire State Building in blue.

A new government survey of parents indicates that 1 in 50 school-age children have autism spectrum disorder (ASD). This is significantly higher than the official government estimate of 1 in 88 American children. It also supports research suggesting that many affected children are being missed by the surveillance methods the Centers for Disease Control (CDC) uses to produce its official estimate.  Among the new survey’s surprising findings was that many children were being diagnosed with autism after age 7. That's 5 years or more after autism can be reliably diagnosed. “Many kids appear to be flying under the radar and may be in regular classrooms.”  It is possible that these children are struggling in areas of life and school, and could benefit from access to appropriate services.”  In addition, children with milder symptoms are the most likely to be affected by upcoming changes to the diagnostic definition of autism, slated to take effect in May. Autism Speaks is taking a proactive role in monitoring the diagnostic changes to ensure that all children who need autism-related services receive them.

Here are some other events taking place during Autism Awareness Month:

If you're organizing an event to support this cause, please email us at news@longisland.com to find out how to be included in this article, and add your event to the LongIsland.com Events Calendar.