The unusual series of exotic animal trappings on Long Island continued over the weekend when Suffolk County SPCA captured an alligator at a local pond.

Unbelievably, the number of alligators captured on Long Island in just the past month has risen yet again, to seven.  According to local reports, the gator was first spotted by a family visiting Lilly Pond Country Park in Lake Ronkonkoma. 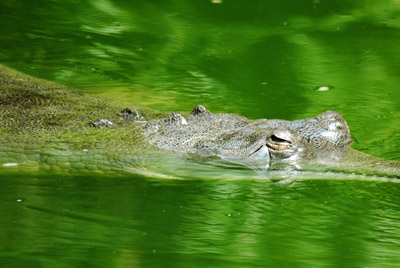 A diver with the Suffolk County SPCA was called in to capture the 3-foot alligator who retreated into the pond shortly after being spotted.
The series of exotic reptile capturing began on Sept. 28, when an alligator was seen in Mastic Beach.  Three days later a second gator was captured at a golf course in Wading River.  The strange events continued over the next two days, when two more were picked up from a Baldwin supermarket parking lot.  In what SPCA Chief Roy Gross called an “absolutely intentional” act, the fifth gator was found in a container outside an Applebee’s in Shirley.  The last gator was picked up Yaphank shortly after.
Other non-native reptiles have been making an appearance on the streets of Long Island.  An iguana was spotted in Patchogue, and a boa constrictor was captured in Mastic Beach.  Recently, a rattlesnake was captured in Bohemia.
According to Gross, these incidents are a result of people taking on the wrong kind of pet.  Owning alligators or crocodiles is prohibited by New York State law, but owners of these animals can obtain a permit for the animal with the Department of Environmental Conservation.
As of yet there has been no indication as to who is behind the wild animal releases.
Share your thoughts on this article by posting your comment below, or visiting our Long Island Living discussion forum.