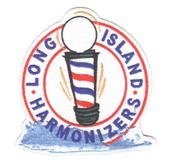 Westbury, NY – March 14th, 2013  – When approximately 23,000 men regularly gather week after week to sing four-part barbershop harmony, there has to be a solid reason. Members of The  Long Island Harmonizers Chorus -- part of the largest all-male singing organization in the world -- will exhibit  that musical passion for barbershopping in an entertaining two-hour presentation set for Carle Place High School, April 20-21, taking a close look at today's ever-widening scope and application of the art form. Theme for the 63rd Annual Show of the Barbershop Harmony Society’s Nassau Mid-Island Chapter is “Barbershop - Broadway & Beyond."

The show will also showcase the local Chapter’s talented quartets as well as a featured guest quartet, ‘Up All Night,” in a Saturday evening performance that beings at 8:07 pm as well as a Sunday matinee to start at 3:07 pm.

Songs in barbershop arrangements currently being prepared for the scripted show, include such Broadway show-stoppers as Music Man’s “Seventy-Six Trombones” and “Lyda Rose;” the rousing title song from Oklahoma; and the stirring “Do You Hear the People Sing” from Les Miserables. In addition the Chorus will sing “You’ve Got To Have Heart” from Damn Yankees and “There’s No Business Like Show Business” that left audiences cheering in Annie Get Your Gun.  Old-time favorites will be performed as well.

All tickets to the 2013 show available at the door will be priced at $15 for regular admission. Cost if payment is received in advance is $13 for seniors and students; $15 for others. The way to order tickets in advance appears on the Chapter's website. For additional information call 516-208-3483.

Carle Place H.S. is located at 168 Cherry Lane, Carle Place.  As in previous years, a portion of the proceeds of the Show will be re-directed to a worthy Long Island charity.

"Barbershopping, considered to be an important part of America’s musical history, is not simply part of its past,” observed Steve Brausa, 2013 Show Chairman. “Today we find the preserved art form on Broadway, in TV episodes, as  part of major talent shows, in radio/television commercials, and in many other aspects of today’s musical scene. Our Long Island Harmonizers chorus and quartets will focus on this wide and varied use, both in the past and present.” As an added entertainment ingredient there will be use of appropriate on-screen photographs to augment some of the performed songs.

The nonprofit Long Island Harmonizers chorus under the direction of Maurice Debar, rehearses Tuesday evenings at Winthrop Hall, Church of the Advent, 555 Advent Street, in Westbury from 8 until 10:30 pm.  The Barbershop Harmony Society of which it is a part, is celebrating its Diamond Anniversary in 2013, having its origins 75 years ago on April 11, 1938 following a hotel rooftop gathering of 26 men. Those interested in joining the local Nassau Mid-Island Chapter, largest of its kind on Long Island, are welcome to come listen and, if they wish, apply for membership with a simple audition.